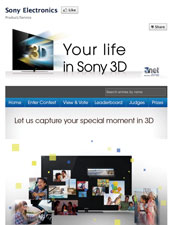 San Diego, CA—First there were 3D movies in theaters, then 3D TV and 3D cameras. Now, Sony is giving consumers a chance to have their most meaningful life event filmed in 3D through a social media-driven contest titled “Your Life in Sony 3D.”

The grand prize is a 3D video of the winning idea shot on Sony professional equipment and aired nationally on 3net, the 24/7 3D network recently launched by Sony, Discovery and Imax.

Unveiled on Sony Electronics’ Facebook page at facebook.com/sonyelectronics, the Your Life in Sony 3D contest invites consumers to be active participants in the 3D phenomenon. Entrants can submit a short event description along with a personal photo in any of four categories: sports & recreation, arts & entertainment, cause & community, or life milestones & events. After the four-week submission and voting period, the five most voted-on ideas, plus an additional five ideas selected by producers at 3net and Sony, will be chosen. These 10 finalists will then be judged by an expert panel.

“3D is delivering an entirely new type of entertainment experience that consumers want—whether it’s Priest on the big screen or the excitement of the World Cup on TV,” said Stuart Redsun, senior vice president, marketing communications, Sony Electronics. “Now, for the first time, consumers can be fully involved in the 3D process, and get to see their own stories told in 3D.”

In addition to local and national media exposure, the winner also receives a tour of the 3D production truck used for the event, as well as an edited 3D video, a Sony 3D HDTV, 3D Blu-ray player and 3D personal video cameras. The edited video of the event will air on the 3net channel and in Sony stores nationwide. A 2D version will also air on the Sony billboard in Times Square. sony.com