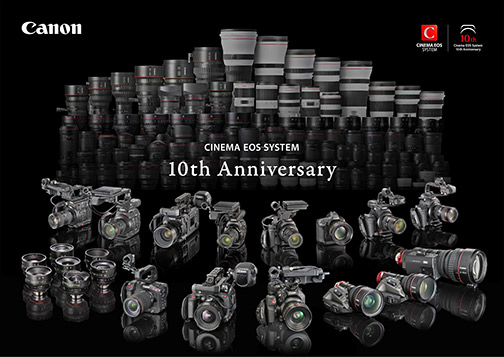 Melville, NY—Canon Inc. announced it is celebrating the 10th anniversary of the Canon Cinema EOS system of professional digital cinema cameras and lenses. The line caters to the film and visual production industries.

In 2011, both film-analog and digital equipment was used side by side in the cinema production industry. Digitalization was continuing its spread, and digital cameras with Super 35mm-equivalent, large-format sensors were becoming the mainstay.

Amid this environment, Canon leveraged its visual as well as optical technologies to launch its Cinema EOS system. With this launch, Canon formally marked its entry into the cinema production industry.

“I am truly honored to have reached this 10-year milestone. It’s thanks to the support from all of you in the cinema production industry we’ve made it all the way here from our very first steps into Hollywood,” commented Hiroto Okawara, Unit Executive, Image Solutions Business Unit 2.

“In order to help creators produce work as close to their ideals as possible, we will continue to push forward in our efforts to further develop the Cinema EOS System. The cinema production industry evolves day by day; Canon will also continue to implement new technologies to create products that serve the ever-diversifying needs of users.”

Furthermore, from the release of its first digital cinema cameras (EOS C300/EOS C300 PL) and lenses (CN-E14.5-60mm T 2.6 L S/CN-E14.5-60mm T 2.6 L SP) in January 2012, Canon sought feedback about performance, ease-of-use and recording styles from end users in cinema production. Based on that, Canon strives to develop products with intuitive ergonomics that enable the shooting styles and visual expression demanded by professionals.

What’s more, the company’s first Cinema EOS camera, the EOS C300, was awarded a Technology and Engineering Emmy award from the National Academy of Television Arts & Sciences (NATAS) in 2012. The C300 features a CMOS sensor that produces video reproduction comparable to 35mm film.

In addition, Canon was honored for its cinema lenses; it received another Technology and Engineering Emmy in 2017 for its 4K cinema lenses.

The Sundance Film Festival also honored the system in January 2020. The winner of the World Cinema Documentary Special Jury Award for Cinematography, Acasă, My Home, was filmed with the EOS C300 as well as the EOS C100 Mark II cameras.