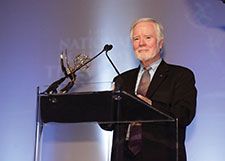 “Larry’s contributions to the overall advancement of broadcast, HD and now 4K image capture and technology have truly shaped the way in which we all view the world and the creative content that is produced. We are honored to continue to work with Larry as he guides not only Canon but the industry toward incredible new horizons in resolution, distribution, color science and optics. His talent and intuitive insight are only exceeded by his good nature, strong heart and witty humor. He is a true asset to Canon and the entire imaging community,” said Yuichi Ishizuka, president and COO of Canon USA, Inc.

“I have indeed had an extended and rich professional life that has seen some of the most exciting developments in video imaging,” said Thorpe, of Canon U.S.A.’s Imaging Technologies & Communications Group, Professional Engineering & Solutions Division. “It is a particularly special privilege to have the final phase of my career coincide with the truly exciting rise of Canon as a major global player in high-end content creation.”

Thorpe recently provided two technical presentations at the CCW SATCON Conference on “Optimizing a 4K RAW Camera Output Signal for Postproduction Flexibility” and “What Does It Take to Make a High Performance 4K Cinematography Lens?” He is scheduled to speak at the HPA Tech Retreat in February 2015.

Larry Thorpe joined Canon USA in 2004 as national marketing executive for the Broadcast & Communications Division and was promoted to his current role in 2012. A renowned expert in the field of video acquisition, he spent more than 20 years at Sony Electronics, pioneering the development of HDTV and digital production technologies in the U.S. broadcast and motion picture industries. Prior to that, Thorpe worked for RCA’s Broadcast Division in Camden, New Jersey, from 1966–1982, where he developed a range of color TV cameras and telecine products. Thorpe holds 10 patents in the field of broadcast development and has published more than 60 papers on camera technology and the topic of HDTV imaging.