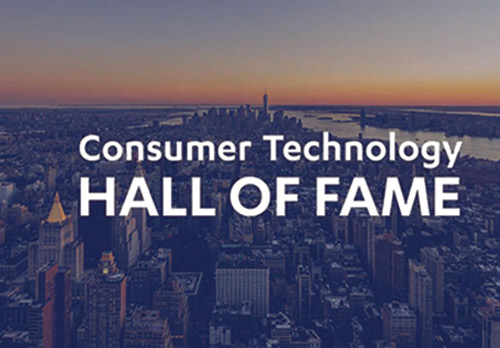 The program celebrates technology leaders who advance innovation and develop, create, market and promote the technologies, products and services that improve consumers’ lives.

“We are thrilled to celebrate the 20th anniversary of the CT Hall of Fame program,” said Gary Shapiro, president and CEO, CTA. “As we honor the past, we also keep an eye to the future to imagine what could be. I am proud to honor the accomplishments of these leaders that inspire each of us with their passion for innovation.”

Moreover, for the first time, CTA honored its Innovation Entrepreneur Award (IEA) winners at the dinner. The IEA program, created in 2012, is a collaboration between CTA’s Small Business Council and It Is Innovation (i3) magazine. The program recognizes a leading CT business and an exceptional start-up. The first to be recognized was the Start-up of the Year—Aurora. The Aurora Driver is a self-driving platform that brings together software, hardware and data services to power all types of vehicle makes and models.

The Company of the Year is Heal, which developed the first app to pair doctor house calls with remote patient monitoring using its Heal Hub, a simple plug-in device. Heal chief medical officer, Dr. Renee Dua, and CEO Nick Desai accepted the award. “During CES 2018, a middle-aged man in business attire walked up who was clearly an executive,” said Desai.

“When he found out I was the CEO of Heal, he dropped his bag, wept in tears and gave me a hug because our service saved his son’s life. The consumer electronics we see at that show and that this industry and association champions aren’t products or services at all. They change the way we live our lives.”

Cofounder and CEO of iRobot and coinventor of the Roomba vacuum cleaner, Angle said, “It blows my mind that the number one selling vacuum today is a robot. It’s great to see we are at the beginning of this journey and not the end. Certainly, the robotics that we were promised extend past vacuum cleaning and extend past the simple things we do today.”

Barry spent 18 years as an influential consumer technology reporter and editor; then 22 years as CTA’s Digital Answer Man. He was represented by his wife, Kate, and his daughters Moira and Fiona. Kate said, “Jim loved all the ‘stuff’ he discovered on his travels. He loved the how and why. Jim Barry was a proud man, but not boastful. He was just Jim Barry: a writer, dad, friend and my dear. This honor befits him. This should have been his speech to make, but Moira, Fiona and I are honored to receive it.”

Feinler organized the online information system for ARPANET, the early version of the Internet. Pam Golden, a longtime CT Hall of Fame judge, accepted the award on her behalf.

Dr. Nakamura invented the blue LED, which makes power-efficient white LED lightbulbs possible, and also the blue laser that the Blu-ray format is based. “In my case, at a small local company in Japan, without any corporation, without any companies, we were able to create that LED blue laser. I’m proud my invention has been part of so many other consumer inventions.”

In 1919, Owen Young founded the first U.S. radio company, RCA. It enabled the commercialization of radio as well as the creation of the consumer technology business. His granddaughter, Shirley Adams, spoke. “From the dirt roads of Van Hornesville, New York, to the sidewalks of world cities, my grandfather demonstrated to his family the love, respect and responsibility that life requires of each of us.”

Over the course of his 40-year career, Chiarelli was a ubiquitous executive for leading consumer technology, e-commerce as well as retail businesses, including RadioShack. Moreover, Chiarelli received two standing ovations. “I’ve always tried to go out of my way to help everyone be the best they can be. But then I had a realization, because it wasn’t just [my colleagues]. It wasn’t just me. If you have a passion for CTA like me, you have spent most of your life reaching out to your brothers and sisters in this organization, making sure they are being the best they can be. This night isn’t about me; it’s about we.”