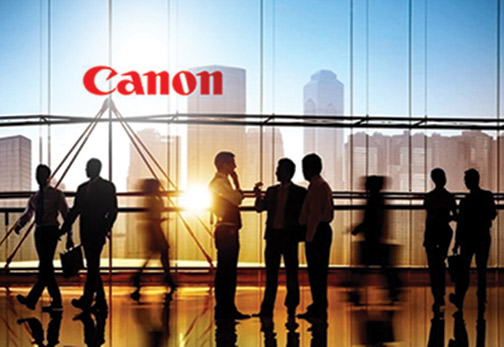 Melville, NY—Canon USA showcased new collaborative visions through its technologies at CES 2022. With the launch of its Canon TogetherNext theme, the company unveiled interactive digital experiences through four cornerstones.

These cornerstones demonstrate how Canon’s solutions make connecting with people, cultures and the world more exciting than ever. Canon also teamed up with actor and producer Joseph Gordon-Levitt and his company, HitRecord. They showed how Canon’s hybrid collaboration technology in development can help them create through a virtual, real-time writers’ room experience.

“2021 was a year of defining the new normal for work and personal interaction. As a company focused on innovation, we, too, had to transform our business model and integrate new technologies that befit the world of today and tomorrow on a collective level,” said Kazuto Ogawa, president and CEO, Canon USA, Inc.

“Inspired by collaboration, we are poised to usher in new solutions that focus on helping people, cultures and the world connect and thrive now and into the future; we are proud to showcase them at this year’s CES 2022.”

Moreover, Canon’s corporate philosophy of Kyosei is threaded through all of the company’s technologies, services and people. Kyosei is defined as “all people, regardless of race, religion or culture, harmoniously living and working together into the future for the good of society.”

CES 2022 showcased what has come from the new normal of hybrid work environments, along with a sense of wanting to be together. With Kyosei as the driving force, Canon’s immersive experience and four cornerstones at CES 2022 educated attendees on how the company looks to contribute to society and have a positive impact.

Create Together with Canon

In 2021, many parts of the world adopted the new normal of hybrid and remote work environments. Canon, with the creation of software tools, like the AMLOS (Activate My Line of Sight) system (currently in development), is looking to help redefine how we see, engage and interact.

In line with the three words of single, simple and seamless, AMLOS uses a single camera. It enables multiple sights; simple operation through gesture control (for in-office participants); as well as seamless connectivity with software such as Microsoft Teams.

What’s more, Canon is developing this hybrid working system to enable in-office presenters to guide the focus of the camera using simple gestures. They can also share digitally enhanced, high-resolution images from the room with remote collaborators. The collaborators can customize their view of the meeting; they can focus on the speaker, the whiteboard, a screen or a prop in the room the presenter is using.

In addition, actor, producer and HitRecord founder Joseph Gordon-Levitt demonstrated the AMLOS system in action during a virtual, real-time writers’ room. HitRecord is all about opening up the creative process and making it as accessible as possible.

To show how the AMLOS solution works, CES attendees could see a virtual writers’ room (from HitRecord’s offices and other locations), as founder Joseph Gordon-Levitt as well as Emmy Award-winning writers and creators of the animated series Wolfboy and the Everything Factory, Edward Jessy and Toff Mazery, creatd an original short film.

Over the course of CES, Gordon-Levitt and the HitRecord team virtually participated and used the AMLOS system to brainstorm film concepts, create characters and develop storyboards. This resulted in an animated short film they will release following CES.

Be Together with Canon

CES attendees were able to also try out the all-new Kokomo software by Canon (currently in development). It is an innovation in virtual reality that combines the 3D experience of lifelike VR destinations with video calling. Visitors entered a real-time “ImmersiveCall,” with a Canon brand ambassador who told them about this new way of connecting.

At the heart of Kokomo is a “Real ‘Together’ Experience,” which has helped to shape the development of the technology. The purpose of the technology is to enable people to have real interactions when they get together.

The Kokomo software uses Canon cameras and imaging technology to create realistic representations of users. Consequently, virtual reality calls feel like participants are interacting face-to-face rather than through a screen or an avatar. Thus, even when people can’t “be there” with the people they love, they can feel like they are.

Furthermore, Canon will soon announce the official launch date of Kokomo. It also has plans to add new destinations, functionalities and features to the Kokomo software. In addition, it will expand compatibility with Canon cameras and lenses. This will include the recent Canon RF 5.2mm f/2.8L dual fisheye lens showcased at CES.

Admire Together with Canon

At CES, attendees also marveled at an ancient piece of Japanese art. This was thanks to a joint project organized by the Kyoto Culture Association and cosponsored and promoted by Canon.

The Cultural Heritage Inheritance Project is a social contribution initiative; its goal is to preserve original cultural assets by creating high-resolution facsimiles of Japanese art. It combines Canon’s technical expertise in imaging, processing and output with the master craftsmanship of traditional Kyoto artisans.

The project will produce and donate high-resolution facsimiles of historical Japanese cultural assets as folding screens, sliding doors and illustrated scrolls to the owners of the original pieces across Japan and the temples, shrines and local authorities that held the pieces before they were sent overseas.

The cameras and equipment used in the process of creating the facsimiles showcased at CES 2022 included an EOS R5 full-frame digital interchangeable-lens camera; a Speedlite EL-1 flash unit; and an imagePrograf Pro-4100 large-format printer.

What’s more, CES attendees could view a high-resolution facsimile of The Wind and Thunder Gods by renowned painter Tawaraya Sotatsu. This delicate, yet grand work is kept under strict climate-controlled conditions. Today, Canon technology has replicated it in the highest level of detail that celebrates the original work.

Experience Together with Canon

In addition, CES attendees joined one of New York’s coolest wheelie crews as they hit various locations throughout Brooklyn. They did so thanks to footage captured on the Canon EOS R5 full-frame mirrorless camera along with the new Canon RF5.2mm f/2.8 L dual fisheye lens. The lens brings stereoscopic 3D VR capture to the R5 as part of the EOS VR system.

The lens is the first digital interchangeable dual fisheye lens capable of shooting stereoscopic 3D 180° VR imagery to a single image sensor. As a result, the complexities of VR production and the ability to view the content in full capacity are streamlined.

However, Canon recommends a VR headset to experience the system’s content in its truest form. Headsets like the Oculus Quest 2 allow viewers to immerse themselves in the content by simply moving their head to provide a vivid wide view.