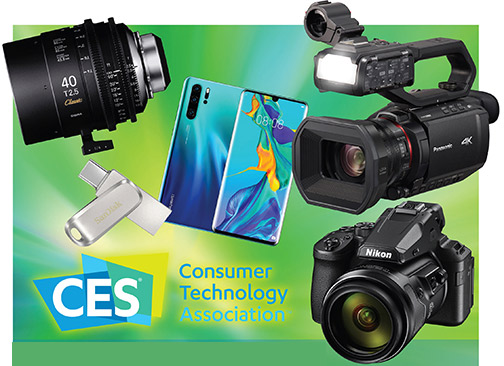 From Traditional Photography/Videography to AR, VR, AI & Drones, CES Had It All

In addition, more than 4,400 companies from just about every corner of the world displayed their wares. And not least among them was a wide range of devices for visual content creation.

According to Gary Shapiro, president and CEO of the Consumer Technology Association, the organization that produces CES, the show inspired and connected every major industry in the world. Besides being the largest trade show in Las Vegas, it is also the largest start-up event in the world. More than 1,200 fledgling companies from 46 countries introduced products and services at this year’s CES. All together, 20,000 new products were introduced.

CES was also a great opportunity to hear different opinions and perspectives. An extensive selection of corporate CEOs, company executives, government officials and industry leaders gave keynote speeches as well as presented their ideas in panel discussions. For example, first daughter Ivanka Trump talked about the future of work; and entrepreneur and start-up investor Mark Cuban gave his assessment of the future of technology and the impact of artificial intelligence.

The diversity of products on display was overwhelming. However, there were certain trends, and artificial intelligence was evident in almost all of them. Virtual reality and augmented reality were also big. There were numerous new autonomous vehicles on the show room floor. Health, fitness and well-being comprised a major product segment. In addition, 3D printing, drones and robotics were all well represented.

Moreover, the Internet of Things (IoT) is growing extremely quickly. With IoT, potentially just about anything in a home that might have power going through it, from refrigerators and AC/heating units to vacuum cleaners and stoves to lightbulbs and locks, is connected to the worldwide web. Basically, in the modern home, everything is connected and everything is wireless.

Furthermore, home security was a major product category. Increasingly sophisticated devices not only tell a homeowner if someone was in the house but also who it might be. Conversely, they can relay who’s not in the house when they should be; for instance, when children haven’t come home after school.

CES is very much about visualization, all the way from traditional photography and video content creation to a wide range of visually enabled devices.

Since the show is consumer oriented, camera manufacturers generally don’t use it to introduce their top-of-the-line professional models; they prefer instead to wait for more photographically targeted shows like WPPI. However, this year there were several introductions of high-end imaging gear. Here is a look at some of the announcements from a range of companies.

Canon rolled out its new flagship EOS-1D X Mark III. Designed with artificial intelligence for predictive tracking, faster focusing and facial detection, the Mark III has the ability to read subjects’ shapes and colors. It can automatically follow subjects across a 191-point autofocus array for high-speed action photography.

Moreover, it features an ISO range expandable from 50 to 819,200; high dynamic range capture capabilities; and a Dual Pixel CMOS AF system with 3,869 manually selectable AF positions, along with face, head and eye detection, as well as servo AF. What’s more, it captures images at up to 20 frames per second. Besides its impressive still imaging capabilities, the camera also has professional-level video capabilities. Among them are the ability to shoot 4K 60p video in Canon Log as well as 12-bit 5.5K RAW video internal recording. Selling at $6,499, the Mark III is expected to start shipping mid-February.

Canon also announced what it is calling a Photo Matching Service. It connects professional photographers with clients.

One camera that some people thought might launch at CES but didn’t is Nikon’s new high-end D6 DSLR. There was, however, a mock-up of the camera on display. Nevertheless, according to a company executive, it was a little too early to publicly release technical details. But the D6 is expected to reach the market well before the Tokyo Olympics this summer. My guess is it will officially debut at the upcoming NAB Show in April.

The idea is to pair the D6 with the new lens that Nikon did introduce at CES. The company rolled out the AF-S Nikkor 120–300mm f/2.8E FL ED SR VR telephoto lens. Ideal for covering major sporting events like the Olympics, it’s a fast f/2.8 across its entire zoom range. Moreover, the constant f/2.8 aperture offers incredible low-light capability, depth of field and the ability to create beautiful bokeh.

The new lens also offers exceptionally sharp image quality, making it ideal for not only sports but also wildlife and portrait photography. In addition, it’s the first Nikkor F-mount lens to adopt Nikon’s new SR lens element as well as its antireflective ARNEO coat to deliver chromatic aberration compensation and effectively reduce ghost and flare. Its built-in VR function provides an effect equivalent to a shutter speed of 4.0 stops; it also includes a sport VR mode for rapidly moving subjects. It’s priced at $9,499.95.

Moreover, Nikon did introduce a couple of new cameras at the show. One of them was the Coolpix P950 ultra-zoom bridge P&S. It has a 16-megapixel sensor; an 83x optical zoom lens; and 5.5 stops of VR image stabilization. In addition, it provides 7-fps continuous shooting and 4K UHD video capture. It retails for $799.95.

While cameras are still the norm for higher-end professional applications, the vast majority of people take their pictures with smartphones. Annie Leibovitz once said that for 95% of the people taking pictures, a cell phone is sufficient.

Huawei’s new P30 Pro may bump that percentage up a few points. Co-engineered with Leica Camera, the P30 is specifically targeted at users who demand high-quality and versatile imaging capabilities. The 128GB cell has four different lenses. Its main lens on the front is a 40MP, exceptionally sharp standard focal length unit. There are also an ultrawide lens that captures images at 20MP and a super-macro lens that takes 8MP images. In addition, on the back, there’s a 32MP selfie camera.

The fast-charging unit is expected to cost around $800 when it ships in late spring. Its co-branding with Leica should make it a popular alternative to DSLRs or mirrorless cameras, even for some serious photographers. However, the P30 will not officially reach retail in the U.S., but consumers can buy and import an international model.

Photographers are explorers, adventurers and big-game hunters. They like aiming their cameras at subjects that aren’t easily captured. While they like to think big, sometimes thinking small is just as rewarding.

For those who may want to put a camera into a very small space, say an ant colony or rabbit hole, or inspect a piece of machinery without taking it apart, the EndoSnake Borescope makes it possible. While the company recommends it for home, auto and firearm inspection, it works virtually anywhere where space is tight or access is difficult. It’s actually quite a bit of fun to play with, once you’ve figure out what it works well for and what it doesn’t.

Its cables come in several different widths; the smallest is 3.9mm. They also come in a number of different lengths, the shortest being 2 feet. They have both a camera and a light attached to one end while the other end attaches to a Wi-Fi-enabled junction box. That makes it possible for a user to see what the camera sees on an Android or iPhone screen. Prices start at $50 for the cables; the Wi-Fi box costs $25.

Visually enabled drones have been around for a long time. But they’re becoming smaller and more affordable all the time. Some of the smallest and least expensive models on the market are the AirSelfies; these drones are a little shorter and a little wider than a smartphone.

Available as the AirPix and AirDuo models, they have a range of 60 feet and a starting price or $100. The AirPix has a 12-megapixel camera, which has a 70º field of view. It is specifically for, what the name implies, taking selfies without outstretched arms or selfie sticks.

The AirDuo is particularly interesting. It has two built-in cameras for capturing both parallel and bird’s-eye view angles. Even though the units are small, the image quality is quite good. Like most visually enabled devices, the AirSelfies can take both stills and video.

One of the fundamental pieces of equipment for augmented reality applications are the glasses that make the augmentation of reality possible. Most AR glasses have a 50º field of vision. However, ANTVR’s Mix waveguide optics AR glasses have a very wide field of view of 96º.

Unlike some AR glasses that have a very futuristic, very noticeable look, this company’s glasses look more like everyday sunglasses. As a result, it’s possible for the wearer to go relatively unnoticed. In a kit with a tracking module and controller, the Mix glasses sell for $799. They are expected to ship by the end of the year.

Displays of All Sizes

Furthermore, displays—ranging from self-color-correcting monitors to 8K televisions and massive video walls—were some of the most visually impressive products at CES 2020.

In the imaging field, color management on monitors is extremely important for serious photographers. While there are a growing number of tools that help in the process, keeping a monitor color corrected is a challenge.

Dell is helping to meet that challenge with its UP2720Q. The ultrasharp 27-inch 4K color monitor has a built-in colorimeter and Thunderbolt 3 connectivity. Via the built-in colorimeter, it’s possible to calibrate the monitor on demand as the need arises or on a preset schedule. In addition, the company’s calibration assistant makes it possible to schedule automated color calibrations even during off work hours.

The unit features a wide variety of tools, including the Dell Color Management package to modify settings and color profiles as well as run calibration reports seamlessly. The unit is priced at $1,995.

What’s more, an entire section of the show was devoted to 3D printing. This field has tremendous potential in applications such as medical devices and prostheses; engineering and prototyping; and also limited quantity production. But, unfortunately, what was displayed at the show, or at least what I had a chance to see, were mainly items that might best be described as kitschy toys and colorful trinkets.

However, to me, more interesting than the autonomous vehicles were the autonomous flying machines that are in development. Bell Helicopter had a different multi-rotor flying unit on display than it had last year. This year’s model was a sleeker all-electric model while last year’s was a hybrid.

In addition, Hyundai is pairing with Uber to develop its own multi-rotor flying unit. Both should be zipping around the sky (with a control operator) within two to five years, if they get FAA approval.

Indeed, that’s really what makes CES so special. Not only is it possible to look and play with the CE products and services that are available now, but it’s also possible to look into the future and see what’s coming down the pipeline. Whether it’s in photography, self-driving cars, medical devices or flying vehicles, the future will usher in more amazing innovations to enhance our lives.