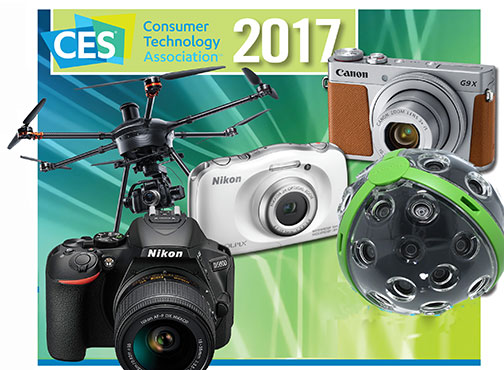 Several attendees speculated that it was an attempt by CTA to de-emphasize the “consumer” aspect of the show. While the products at the show are aimed at consumers, CES isn’t open to the general public. It’s really targeted at the people who drive the electronics industry.

More than 175,000 industry professionals, including 55,000 international visitors, attended the record-breaking show. That’s more than 10% higher than expected. The show featured more than 3,800 exhibiting companies, including numerous giant international corporations and countless smaller firms. There were even some 600 start-ups that were just trying to get their foot in the door.

Venues were spread out throughout Las Vegas. CES took up all of the Las Vegas Convention Center (which bills itself as the largest convention center in the world), one floor of the large Sands Convention Center and various individual resort convention centers, exhibit halls and meeting rooms throughout the city. All together, more than 2.6 million square feet of exhibit space was occupied.

Besides the offerings on display on the showroom floors, there were elaborate press previews, interesting interactive demonstrations, professional and educational conferences, and special product showcases. These included CES Unveiled, Digital Focus and ShowStoppers, where it was possible to meet and talk to many of the founders of the firms exhibiting at the show, and some of the inventors and developers of the products on display.

The best way to describe CES in one word is “massive,” but “overwhelming” would also work.

One thing is clear from CES 2017, an individual’s smartphone will increasingly become the control center of his or her life. There were smartphone apps for everything from a skateboard (which the developer said wasn’t a skateboard but a mobility device) controlled by an app to a coffee mug that kept your beverage at the specific temperature set by the app. And there were apps to control baby monitors and children’s toys, fitness equipment, health status monitors and home security devises.

A number of major trends stood out at the show. Car technology was really big. A variety of driver-assisted and self-driving cars were shown in the demonstration areas that dominated the parking lots. Robotics and robots were everywhere. 3D printing was also well represented.

Of course, there were visually enabled devices. In fact, since cameras are built into all smartphones, almost everything that you could possibly imagine, and many things you might not, have visual components to them. Some of these visually enabled devices were designed for a variety of types of image capture—from simple visual documentation to sophisticated photography—while others were designed primarily to handle various monitoring and surveillance tasks.

Probably the biggest category of visually enabled devices at the show was aerial drones. There were some that were smaller than hummingbirds while others looked like they were large enough to carry a small child.

There was a nice selection of traditional photographic gear on display. Canon, Nikon, Panasonic, Ricoh, Sony and a number of other major camera manufacturers showed their wares. Most of the cameras and lenses being shown were either introduced or previewed at photokina in Cologne last September or at PhotoPlus in New York in October.

While there were definitely exciting, new products boasting imaging innovation announced at CES, most companies said they were waiting for the 2017 WPPI show. That conference and expo was moved up to early February this year and will relocate from the MGM Grand Convention Center to the larger LVCC.

There were several distinctive trends in imaging innovation evident. One was higher resolution. Canon showed a prototype of its 250 megapixel, full-frame sensor. That’s an exponential increase over resolutions available today. The company didn’t provide a lot of information about what its plans for the sensor are, but it was showing, under glass, a boxy looking prototype camera attached to a large lens that incorporated the chip.

It features a 3x optical zoom, 28mm lens with maximum f/2 lens and advanced image stabilization that will compensate for up to three stops. With in-camera RAW processing, it can shoot bursts at 8.2 frames per sec and records Full HD video. Available in black or silver/brown, the G9 X is equipped with a 3-inch touch screen and always-on Bluetooth (plus Wi-Fi) for continuous connectivity. It’s priced at $529.99. usa.canon.com

Nikon unveiled a new compact, digital SLR, the D5600. The “connected” camera is designed around a 24.2 megapixel DX-format CMOS sensor with an advanced Expeed 4 image processor and a 39-point autofocus system. It can shoot at up to 5 fps, records Full HD video and has an expanded ISO range of 100 to 25,600. Also featured are a large 3-inch, vari-angle touch screen, a special time-lapse mode and Wi-Fi/NFC/Bluetooth connectivity. It retails for $699.95 body only and also comes bundled in three different lens kits. nikonusa.com

Another trend in imaging innovation was miniaturization. Digital cameras are getting smaller and smaller, and more and more sophisticated, all the time. One of the smallest cameras I saw, and probably the smallest at the show, was the PogoCam by PogoTec.

The wearable camera weighs less than two dimes and measures only 0.4×0.5×1.7 inches. To be used, it requires eyeglass or sunglass frames that have a proprietary magnetic strip called PogoTrack, to which it attaches. The PogoCam can capture up to 100 5MP images or two minutes of continuous 720p HD video with audio. Its charging time is bout 35 minutes.

Most people are familiar with the Google Glass wearable cameras. While they do more than simply take pictures, they’re expensive and they look rather obvious. The PogoCam is priced at around $150 (which includes a pair of sunglasses with a PogoTrack strip) and is relatively unnoticeable. It will launch this spring, and a number of sunglass and prescription frame manufacturers are producing models with the PogoTrack in them. pogotec.com

One of the most popular types of cameras in recent years is the mirrorless, interchangeable-lens camera. This category, perhaps, leads the sector in imaging innovation. They’re capable of capturing images that compete very effectively in resolution and quality with DSLRs. And they do this at a fraction of the weight of the larger-bodied, single-lens reflex cameras. Many professional photographers are adding mirrorless cameras to their arsenals as backups. However, they are finding they’re using those more often then their primary cameras.

YI Technology, the company that developed the tiny 4K+ action cam (which has been dubbed the “GoPro killer”), introduced a new Micro Four Thirds format mirrorless camera, the YI-M1. It can capture still images of 20 megapixels and record 4K video at 30 fps. Styled a little like a Leica, the camera has ISO settings up to 25,600 for very effective low-light photography.

It has a 3-inch touch-screen LCD and two-button operation. Utilizing a Sony IMX269 image sensor, it shoots like a professional camera and delivers professional results at a consumer price. And, it also has built-in Bluetooth and Wi-Fi connectivity for sharing to smartphones

In black an also silver versions, the YI-M1 sells for $349.99 with a 12–40mm f/3.5–5.6 zoom lens or $449.99 with a 42.5mm f/1.8 portrait lens. (The MFT format utilizes a half-sized sensor, so the 35mm equivalent coverage of those lenses is double.) Since it is an MFT mirrorless mode, the M1 is compatible with more than 50 interchangeable lenses produced by the various companies that support the Micro Four Thirds standard. yitechnology.com

Panasonic unveiled the much-anticipated Lumix GH5 for photo enthusiasts and pro videographers wanting to capture 4K 60p/50p video and 6K photos. The MFT mirrorless camera uses a new Digital Live MOS sensor and Venus engine. The sensor increases the pixel count by 25% compared to the GH4, to 20.3MP, and omits the low-pass filter. The signal readout speed was accelerated by 1.7x in the sensor, while the Venus engine processes signals at a 1.3x higher speed—all to enable 4K 60p/50p ultrahigh-definition video recording.

With a host of pro video features, just about every other spec is enhanced on the GH5. It achieves an AF speed of 0.05 sec and 12-fps (AFS) high-speed bursts. The number of focus areas was increased from 49 to 225 for more precise focus. Splash- and freezeproof, it also features a post-focus function; a double SD card slot compatible with UHS-II; a 3,680K-dot OLED live viewfinder; a 3.2-inch, free-angle rear touch screen; plus Bluetooth and Wi-Fi connectivity. It will ship in March for $1,999.99, body only. panasonic.com

Another major imaging innovation evident at the show was the category of virtual reality (VR). VR cameras were numerous. They ranged from inexpensive fun models like the Dunkam 360º, a small lens module that couples to an Android smartphone and sells for $99, to more sophisticated models like the Panono, a 360º-coverage, ball-shaped device.

The Panono comes equipped with 36 individual fixed-focus cameras that are triggered simultaneously to capture the entire surroundings in a single, fully spherical 108MP image. Up to 600 images can be stored on the camera’s internal 16GB of memory. The Germany-based Panono company also provides a cloud-based service for fully automated stitching and hosting of 360º images. Via Wi-Fi and a smartphone app, captured images are uploaded to a personal Panono cloud account, where they are stitched and uploaded to a secure website for viewing and downloading.

For professional VR photography, the Panono sells for $2,250. Organizations like Universal Studios, the Minnesota Vikings as well as the World Wildlife Fund are using Panono cameras to capture VR. panono.com

Most of the imaging innovation emphasis at the show was on image capture. But output is also important. The inks required to output digital prints have always been expensive. For some desktop printer models, inks might cost $90 to $120 for a complete set of six or eight colors. There are finally less expensive ink options coming to the market.

Epson, for example, showed its EcoTank line of super-tank, all-in-one printers, including the WorkForce ET-16500. It features advanced ink replacement technology with easy-to-fill ink tanks rather than individual cartridges.

The supersized ink tanks include enough ink to print 10,500 to 11,000 pages. That’s equivalent to about 50 ink cartridge sets, resulting in savings up to 80% on inks. The high-capacity ink bottles aren’t much more expensive than individual ink cartridges. That’s a significant development in digital printing.

The ET-16500 can output in sizes up to 13×19 inches at 4,800×1,200-dpi resolution, and it also scans originals at up to 11×17 inches. The printer can hold 500 sheets of paper and has a separate rear slot for specialty papers. It automatically handles two sided printing, copying, scanning and faxing, and it includes an Ethernet connection for network printing, and Wi-Fi for wireless printing. It’s available for $999.99. epson.com

The hybrid, integrated system of replenishing ink was developed to be more cost effective. It also offers a higher page yield than previous Pixmas. According to specs, the black ink provides 6,000 pages per bottle and the color ink combination provides 7,000 pages. Furthermore, refillable ink bottles offer 135ml in the black bottle and 70ml in each color bottle. Prices range, depending on printer functions, eg, scanning, faxing, Wi-Fi, from $249.99 to $399.99. usa.canon.com

In all, CES 2017 was a bustling, expansive show. While not always front and center, imaging innovation and high-tech products were impressive and varied.