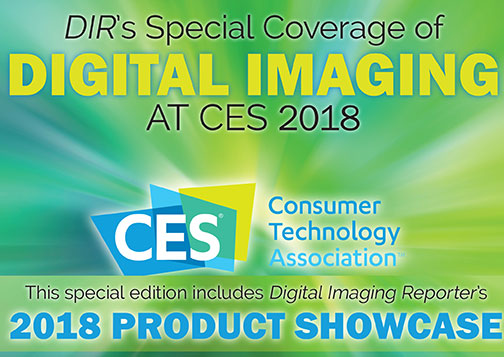 An exclusive feature of Digital Imaging Reporter’s CES convention coverage of the digital imaging category, the 2018 Product Showcase shines a light on some of the most recently introduced and noteworthy photo-imaging equipment.

This anticipated upgrade of the D810 was worth the wait. It combines a 45.7MP BSI, FX-format sensor with no optical low-pass filter and an Expeed 5 processor. They deliver 7-fps, full-res bursts that capture 51 lossless, 14-bit RAW files with full AE/AF. The DSLR has sensitivity settings of ISO 32–102,400. And 4K UHD video is achievable at 30/25/24 fps in full-frame or DX crop-sensor framing.

Manfrotto’s 360º virtual reality (VR) line consists of dedicated products “designed to support professionals and enthusiasts shaping the future of photography and videography.” They include bases, accessories and extension booms to make it easier to create 360º video/photos.

The VR bases, which come in various sizes and materials, provide stable support and are compact enough not to show in 360° shots. VR boom extensions maximize camera height when required and can be connected to all the portfolio’s bases. The 360° VR range also includes kits designed to make 360° content creation easy. The kits are compatible with popular 360° cameras and pair with Manfrotto’s 360Rize VR rigs.

The camera is the first of a lineup to launch in 2017 and 2018. It’s meant to bring back the nostalgia of capturing and sharing Kodak Moments—putting print in-hand the moment it happens. With no computer or Wi-Fi connection needed, the Printomatic produces 2″x3″, water- and tear-resistant, as well as smudgeproof, prints without ink cartridges, toner or film.

DJI’s Mavic Pro Platinum takes the advanced features of the popular Mavic Pro and builds on them. Targeted at travelers, amateur photographers and outdoor enthusiasts, the upgraded drone boasts an 11% flight-time gain, taking it up 30 minutes, and a 60% noise power reduction. Additionally, its compact body has a new platinum-colored shell.

The enhancements are the result of new electronic speed controllers and newly developed propellers compatible with the current Mavic Pro. Pilots also will benefit from a portable drone with a 4K stabilized camera, 12MP photo resolution, a 4.3-mile range, FlightAutonomy technology to sense obstacles 49 feet away and intelligent flight modes. $1,099.

It has a 0.4-sec start-up time, 0.25-sec shooting interval, 0.05-sec shutter lag and 0.06-sec AF speeds. It records Full HD and 4K video at 30/25/24p, 100Mbps with film simulations. Video can be output to an external monitor. It’s also the first X-series ILC with Bluetooth LE wireless communication, letting users pair it with a smartphone for transfer/remote control.

Other features: a 3″, 1.04M-dot, touch-screen LCD that can be used to select the focus area or a specific point; swipe/scroll control functions; pinch out and pinch in sizing; a focus lever for joystick-type operations to select a focus area; and an auto mode selector lever. $899.95. fujifilmusa.com, LVCC, South Hall 2, Booth MP25673

The lightweight, interchangeable-lens Olympus OM-D E-M10 Mark III offers the image quality of the OM-D line and simple operation. For snapshooters/phoneographers stepping up, the mirrorless camera boasts in-body 5-axis IS to deliver blur-free images no matter the lens. It employs the same TruePic VIII processor on the flagship OM-D E-M1 Mark II to deliver “high-quality images even in situations when camera shake typically causes blur” or recording 4K video handheld.

Sirui mobile accessories, developed to broaden the creativity of smartphones for photography/videography, consist of lenses, cases, adapters, table tripods and selfie sticks. Three updated lenses are made with German-manufactured Schott optical glass. The glass incorporates multilayer, antireflection coating for high light transmission and is said to offer precise color rendition and reduce vignetting and distortion. The all-metal construction of the lens housing is designed for durability.

With the average focal length of smartphones at about 29mm, Sirui lenses are designed to adjust that. A wide-angle circular polarizer filter is also available ($19.94). The lenses include an 18mm wide-angle, a 60mm portrait for capturing the depth needed for portraiture or when photographers want to get closer; and a fisheye lens with a 170º field of view for use when the widest field of view is needed. Available in black, red or blue, each comes with a front cap and a hard case with a carabiner for $69.99. sirui.com, LVCC, South Plaza, Booth 62317

Polaroid Originals, a new brand from Polaroid, launched with a commitment to analog photography. Its first product is the OneStep 2 instant camera inspired by Polaroid’s original 1977 OneStep.

Priced at $99.99, the OneStep 2 is designed to be as easy to use as the original OneStep but incorporates modern features. They include a more precise, aspheric lens; a strobe flash; a 60-day, built-in USB rechargeable battery; and a self-timer. The OneStep 2 works with all i-Type film and 600 film. The instant film camera is available for preorder in white and graphite versions.

Along with the OneStep 2, Polaroid Originals announced a new generation of color film said to be sharper and brighter than the Impossible film that preceded it. Development time was whittled down to 10–15 minutes, and the company says “it’s a big step forward for our instant color chemistry.” us.polaroidoriginals.com, LVCC, Central Hall, Booth 16615

The M100 is Wi-Fi/NFC/Bluetooth connected, enabling live view remote shooting/viewing with a smart device. Its revamped touch interface makes it easy to change settings and focus with one touch. The 3″, touch LCD also tilts. A creative assist function lets shooters go beyond auto mode. To blur backgrounds, e.g., they select the effect within the assist menu and the M100 makes adjustments viewable in live view.

Weighing 39.3 oz., the lens is claimed to be the lightest weight in its class for 35mm full-frame DSLRs. It features magnesium material in key areas of the barrel “to improve weight reduction, strength and portability.” Engineered to deliver fast, precise autofocus and consistent VC (vibration compensation) benefits, it employs a high-speed dual MPU (micro-processing unit) control system.

Moreover, it works with Tamron’s 1.4x teleconverter and the Tamron TAP-in Console. It also features a 59″ minimum object distance and 1:3.6 magnification ratio. An Arca Swiss-compatible tripod mount is available as an optional accessory. tamron-usa.com

Built to capture immersive 5.2K spherical content, the waterproof (16 feet) GoPro Fusion camera marks the beginning of a new era for GoPro. With the GoPro app, users can play back and share its captured footage as VR (virtual reality) content. Or they can use the Fusion’s OverCapture feature to recapture 360º footage and share a spherical shot as a traditional fixed-perspective video. OverCapture will be part of a GoPro app update launching in early 2018.

Spectral shoulder bags are designed so photographers can remain inconspicuous during shooting, while knowing their gear is safer from theft and the elements. A magnetic Fidlock clasp enables quiet, one-handed access—then locks automatically when the flap closes. An additional zippered closure for added protection when traveling can be tucked away while shooting.