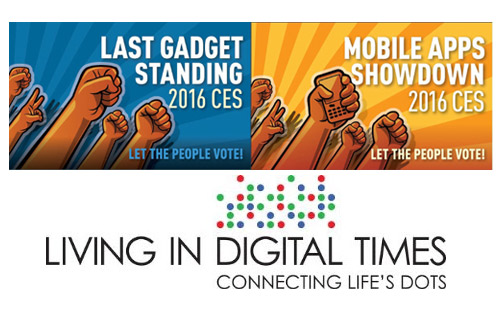 New York, NY—Living in Digital Times unveiled the finalists for the Last Gadget Standing and Mobile Apps Showdown—its two lifestyle technology contests held at CES 2016. There will be two winners for each award, one from the live audience vote and the other from the online vote that is now open.

David Pogue, founder of Yahoo! Tech, will emcee the live events at the Las Vegas Convention Center. “CES is a feast for tech eyes,” said Pogue, “and Last Gadget Standing and Mobile Apps Showdown put the icing on the cake.”

“We began these contests years ago to make sure that CES attendees were getting a voice in deciding what the most likely products to succeed at CES would be. And it’s worked,” said Robin Raskin, founder and president of Living in Digital Times. “This year’s variety of gadgets and apps include everything from drones to childlike robots to pain relief.”

A panel of judges, including journalists, engineers, designers and developers, selected the finalists. More than 500 CES attendees are expected for the live shows and will vote using a “nonscientific” but engaging sound applause meter for a winner at each event. The online voting component is open through January 7, 2016.

Finalists for Last Gadget Standing will demo their gadgets on stage January 8, 2016 at 11:30 a.m. in the Las Vegas Convention Center, North Hall, Room N257. The finalists are:

•    BeON Home Protection System is a smart lightbulb. It can listen as well as respond to sounds and a variety of emergencies.

•    Codrone is a small drone and Khan Academy-style online curriculum that teaches students how to code. Classes can be in schools or at its own Education Centers. With something as engaging as a drone, students embrace the coding challenge.

•    Edwin the Duck takes the old rubber ducky and gives it high-tech powers. Edwin senses bathwater temperature, sings and talks and is constantly growing along with the kids.

•    iPal is a 3.5-foot tall companion robot for young children. It is shaped like a child and has all the anthropomorphic moves to be a plaything.

•    Ripple Maker is a device that turns every cup of coffee into an artistic custom-printed experience. Using coffee extract, the Ripple Maker creates stunning designs atop the foam of a cappuccino or latte.

•    Zolt Laptop Charger Plus solves the irritating problem of keeping devices charged in a new way. It’s a small, lightweight device that can charge most laptops and mobile devices.

There is also one product that’s under wraps and won’t be announced until CES 2016.
Hint, it produces a new kind of image

Finalists for the Mobile Apps Showdown will demo their apps on January 8 at 1:30 p.m. in the Las Vegas Convention Center, North Hall, Room N257. The finalists are:

•    Gloopt allows users to create one-minute branded videos from their smartphone. They can add a logo and clickable call-to-actions to the video, and then share them instantly.

•    iHeartLocal helps businesses grow in three steps: connect, retain and reengage current as well as new customers, without the middlemen involved in other local commerce solutions.

•    Kuddly connects to veterinarians worldwide through live chat as well as e-mail messages 24/7.

•    My Open Road is a social energy conservation app that encourages users to reduce their carbon footprint. It also spurs them to get fit by suggesting alternative transportation. Users are rewarded for their efforts in saving the earth with discounts from sustainable living partners.

•    Perfect Company is a new approach to recipe perfection. It features a new app that connects to a smart scale, ensuring consistently delicious results.

•    PBS Kids Party app gets kids up and moving with four activities to move, dance, swing or break a piñata. It can also work with a Moff band that reacts to the kids’ movement to enhance the experience.

•    SunPort is a combination of hardware and an app that lets users check their daily and weekly energy use. It then directs them to offset energy costs with the right solar provider.

•    VidMob is a mobile marketplace that connects freelance video editors with video content creators in order to transform that content into exciting, entertaining, professional-quality video.