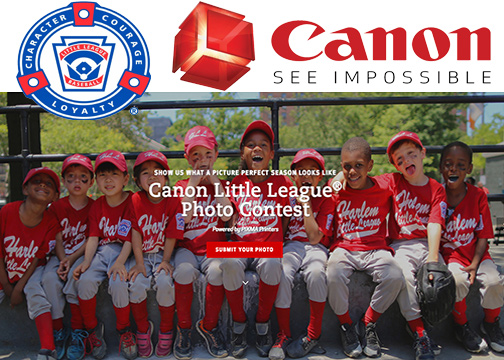 Melville, NY—Former Major League All-Star and New York Yankee, Mark Teixeira, swings back into action with Canon USA in support of the Canon Little League Photo Contest. Teixeira will be on hand at the Little League Baseball World Series in South Williamsport, Pennsylvania, on August 27 to meet the winners. He will also unveil the winning photos.

“As a former MLB player, there are countless photos of me playing professionally. But as a father, I now appreciate the importance of capturing the early years. There’s nothing like that first Little League photo of your child,” said Teixeira. “I’m very excited to partner with Canon this year because I understand the power of printed images to share life’s most exciting moments for years to come.”

Fans are encouraged to make the season “last a lifetime” by submitting their favorite photos to the Canon Little League Photo Contest, powered by Pixma printers. By visiting littleleague.org/canonphotocontest and submitting photos by June 30, 2017, they will have the chance to win one of three grand prizes—one for each theme.

The prizes include a trip to join Mark Teixeira in South Williamsport, Pennsylvania. The winning photos will also be on display for up to one year in the World of Little League Museum in the Richard “Hank” Bauer, Jr., Little League Photography Exhibit at the World Series Gallery. It exhibit is presented by Easton Foundations.

“Canon is proud to partner with the Little League World Series and team up with generations of families hoping to capture the moment where their little leaguers’ hard work and character is put on display,” said Yuichi Ishizuka, president and COO, Canon USA, Inc. “Canon Pixma printers continue to support those looking to make these memorable action-packed moments sharable for generations to come.”

The Canon Little League Photo Contest focuses on three themes: Stepping Up to the Plate—an in-action game shot; Fandemonium—a photo that showcases fandom; and Team Spirit—a photo that exemplifies team spirit. Entries will be judged on the use of the theme (50%) as well as on the quality of the image (25%) and overall impression (25%).

“The Canon Little League Photo Contest serves as a celebration of treasured Little League memories each year,” said Liz DiLullo Brown, Little League’s vice president, Marketing & Communications. “Those special moments, captured and cemented in time through photographs, help us to remember how treasured the Little League program is by families around the world.”

For tips on capturing the winning shot, fans are encouraged to print the Pixma Picture Perfect Season toolkit. Along with tips, this all-in-one toolkit also offers fans free downloadable coloring pages, photo frames and snack recipes. They can also follow along on Canon’s Facebook, Instagram and Twitter pages.

No purchase is necessary to enter the Canon Little League Photo Contest. It is open only to legal residents of the 50 United States and the District of Columbia. Participants must be age 18 and older and a legal adult at the time of entry.

The photo contest started on May 1, 2017 and ends at 9:00 p.m. ET on June 30, 2017. See the official rules for complete entry details and restrictions, photo guidelines and prize descriptions.

Mark Teixeira is a former MLB first baseman. He played 14 seasons for the Texas Rangers, Atlanta Braves, Los Angeles Angels of Anaheim and New York Yankees. Before his professional career, he played college baseball at Georgia Tech. In 2000, he won the Dick Howser Trophy as the national collegiate baseball player of the year.

One of the most prolific switch hitters in MLB history, Teixeira was an integral part of the Yankees’ 27th World Series championship in 2009. He led the American League in home runs and RBIs that  year. He also finished second in the 2009 Most Valuable Player Award balloting.

Teixeira was also a three-time All-Star. In addition, he won five Gold Glove and three Silver Slugger awards. He also holds the major league record for most games with a home run from both sides of the plate. His total was 14. Furthermore, he was the fifth switch hitter in MLB history to reach 400 home runs.

For the 2017/2018 season, Mark Teixeira is a full-time analyst for ESPN’s Major League Baseball coverage. usa.canon.com