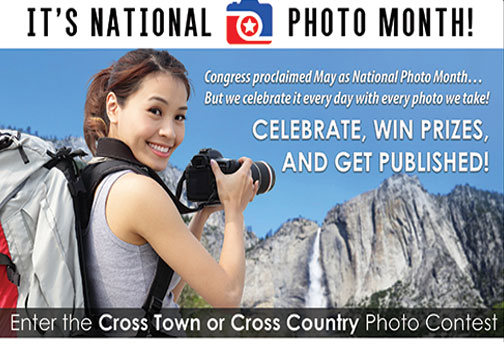 Atlanta, GA—Vivid-Pix, the Imaging Alliance and the Family Motor Coach Association announced the Cross Town/Cross Country photo contest for National Photo Month. (FMCA is an international organization for families who own and enjoy the use of RVs.)

To commemorate photography, May is National Photo Month. Officially recognized by Congress in 1987 as a monthlong event, National Photo Month is a time to recognize that the best photo moments can be created at home, in towns large and small, and in travels across the U.S.

It’s in that spirit that consumers are invited to enter photos of their local community, historical photos of their families and photos taken in U.S. National Parks. One grand prize winner will be awarded a $500 U.S. savings bond. In addition, three first-place category winners will receive a U.S. National Parks annual pass. The three categories are: Around Town; Last Century; and Treasured Parks.

To enter the contest, or to download the Vivid-Pix software, visit crosscountryphotos.com. Consumers can enter as many photos as they like. However, all photos must post by 11:59 p.m. EDT, May 31, 2018. Moreover, all images submitted must be the work of the individual submitting them.