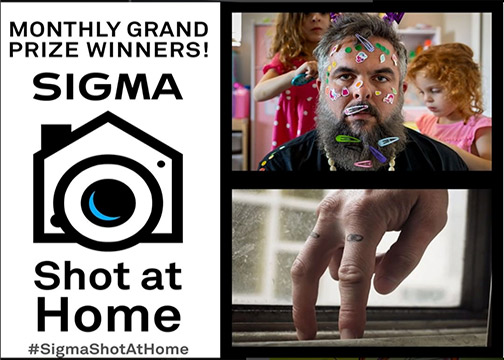 Ronkonkoma, NY—Sigma Corporation of America chose the Sigma April grand prize winners for its #SigmaShotAtHome contest from its pool of weekly April winners. Marcel Lecours, founder and art director at SimpleFly Creative, won for his photo submission Self Portrait of a Quarantined Dad; Marshall Victory, cinematographer, won for his short film Mano A Mano.

“In the first month of #SigmaShotAtHome, we reviewed hundreds of incredible, overwhelmingly creative photo and cine submissions,” said Mark Amir-Hamzeh, president, Sigma Corporation of America. “Both Mano A Mano and Self Portrait of a Quarantined Dad exemplified the spirit of #SigmaShotAtHome. They tapped into some universal quarantine feelings with precision and levity. Congratulations to both of our April grand prize winners and to all our weekly winners from the month!”

Since the contest kickoff, Sigma has received more than 800 #SigmaShotAtHome entries. Moreover, they were narrowed down to one photo and one cine winner each week. Both grand prize winning submissions were selected from the pool of weekly winners.

In addition, a panel of Sigma photography and cinematography professionals judged the entries. Decisions were based on creativity, originality and adherence to the theme of “shot at home.”

“With the limitations of quarantine, I initially wanted to challenge myself to make a film that required no one else and could be achieved without VFX,” said Victory. “While watching Yuen Woo-Ping’s The Magnificent Butcher (1979), I saw this incredible hand calligraphy fight; I thought, ‘What if they were fighting over hand washing?’

“That premise as well as the quarantine limitations truly provided the creative outlet of telling a relevant and topical story. In the end, I did collaborate with Leo Chor on postproduction sound; his work and feedback were invaluable. However, for the actual physical production, I relied on whatever was available to achieve the shots I was going for.”

Watch how Victory created and filmed the practical effects of Mano A Mano.

Self Portrait of a Quarantined Dad

“Like so many others, my wife and I are balancing working from home and taking care of our twin 4-year-old daughters during this quarantine,” explained Lecours. “On the afternoon I took this photo, it was my turn to watch the girls; they decided I was in need of a makeover.

“They had me sit down in their playroom while they went to work on me. After a while, my wife passed by, took one look at me and said I looked like the poster boy for quarantined parents all over the world. So, I asked her to grab my camera, tripod and shutter release cable and bring it to me. I got lucky that there was some pretty nice light coming in through the playroom window and the girls were distracted long enough to let me fire off a few shots. The rest, as they say, is history.”

Check out Self Portrait of a Quarantined Dad here.

With no specific lens or camera requirements, the contest is open to all professional and amateur U.S. creatives. Running weekly since April 6, 2020, it continues through June 26, 2020. Further,  #sigmashotathome is hosted online.

There is no entry fee and participants can submit up to 10 entries each week. For complete contest details as well as rules and regulations visit https://www.sigmaphoto.com/sigmashotathome.