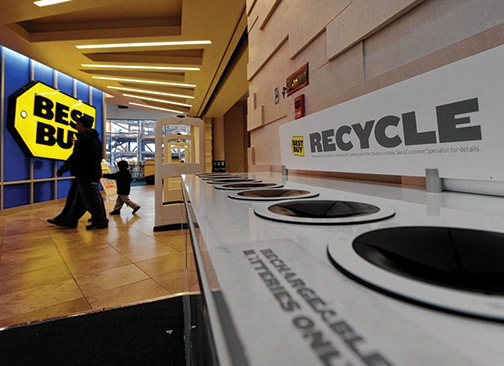 Las Vegas, NV—Best Buy earned the top ranking from Barron’s based on its sustainability practices. The nationwide consumer electronics retailer has collected two billion pounds of appliances and electronics through e-waste recycling programs.

The company also purchased a fleet of hybrid cars for its Geek Squad staff and other employees making house calls. In fact, Best Buy’s efforts have reduced its carbon emissions by more than 50% since 2009. Moreover, that puts it well on its way to its goal of 60%.

“Sustainability is embedded in everything we do,” said Hubert Joly, Best Buy chairman and CEO. “It starts with the company’s philosophy to contribute to the common good and our purpose to enrich lives through technology by addressing key human needs.”

The company’s number-one ranking reflects more than a decade of work contributing to the sustainability and the common good. In addition to collecting nearly two billion pounds of appliances and electronics for recycling, Best Buy also undertook several other measures.

It expanding the network of Teen Tech Centers to 22 locations and is also making progress toward a goal of 60 Teen Tech Centers by the end of 2020. These facilities are preparing teens from underserved communities for the tech-reliant jobs of the future.

Other sustainability measures include upgrading its stores as well as distribution centers with LED lights. Best Buy also updated to more efficient heating and air-conditioning systems. “It’s a business imperative,” Joly added. “This is not about stuff that makes us feel good. . . . It’s an integral element as to who we are as an organization.”