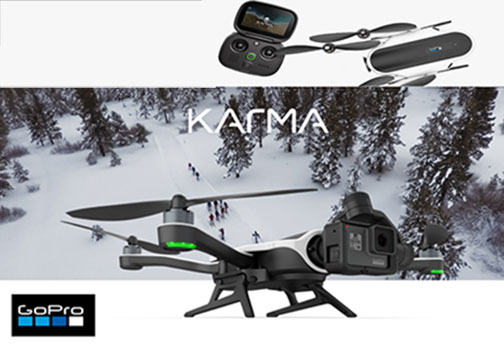 The company did see bright spots in earnings. It had better than expected sales of its Fusion spherical camera. However, the marketing environment of its Karma drone has caused GoPro to withdrawn from the category.

“At the start of the holiday quarter we saw soft demand for our Hero5 Black camera,” said GoPro founder/CEO Nicholas Woodman. “Despite significant marketing support, we found consumers were reluctant to purchase the Hero5 Black at the same price it launched at one year earlier. Our December 10 holiday price reduction provided a sharp increase in sell-through.”

Sales of the newly introduced flagship Hero6 Black camera performed as expected during the 4Q. This week, GoPro lowered the price of the premium model from $499 to $399. This move was to align with GoPro’s good, better, best product strategy.

“GoPro is committed to turning our business around in 2018,” added Woodman. “We entered the year with strong sell-through and are excited with our hardware and software roadmap. We expect that going forward, our roadmap coupled with a lower operating expense model will enable GoPro to return to profitability and growth in the second half of 2018.”

Woodman asserted that in 2018, GoPro would continue to innovate with several new products aimed at new and existing customers. Its sharper focus will enable an $80 million reduction in operating expenses compared to 2017 levels, resulting in a target operating expense level of below $400 million for 2018 on a non-GAAP basis.

The lower non-GAAP operating expense target will be achieved through various strategies. These include a reduction in its global workforce from 1,254 employees to fewer than 1,000 employees worldwide. Woodman will also reduce his 2018 cash compensation to $1.

Woodman also noted that although Karma reached the #2 market position in its price band in 2017, “the product faces margin challenges in an extremely competitive aerial market.

“Furthermore, a hostile regulatory environment in Europe and the United States will likely reduce the total addressable market in the years ahead. These factors make the aerial market untenable, and GoPro will exit the market after selling its remaining Karma inventory.”

The company will continue to provide service and support to Karma customers. gopro.com