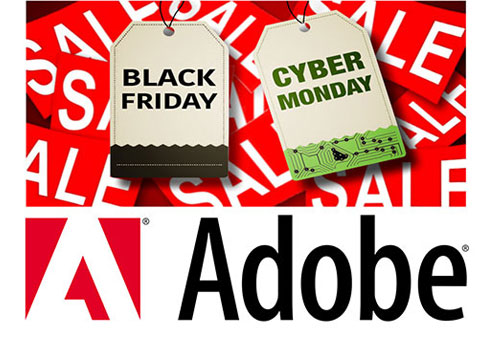 San Jose, CA—Adobe released its 2016 online shopping data for Cyber Monday and the Thanksgiving holiday weekend. Cyber Monday was on track to hit a new record with $3.39 billion spent online. That represents a 10.2% increase year-over-year (YoY) from 2015.

The numbers will mark the largest online sales day in history. It slightly surpassed Black Friday 2016, whose figures came in at $3.34 billion. Cyber Monday is also expected to generate slightly less mobile revenue than Black Friday at $1.19 billion, a 48% YoY increase.

According to Adobe, “The holiday shopping season so far (November 1–28) is expected to drive a total of $39.9 billion in online revenue, a 7.4% increase YoY, with 27 out of 28 days this holiday season generating over $1 billion.” 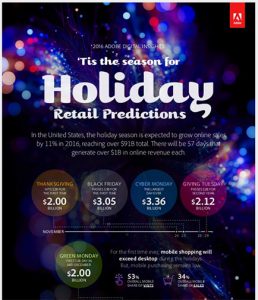 No surprise, Adobe found mobile devices continue to drive the majority of visits to retail websites on Cyber Monday at 53% (44% came from smartphones, 9% from tablets). Mobile accounted for 35% of sales (25% smartphones, 10% tablets).

Adobe’s Cyber Monday report is based on aggregated and anonymous data from 23 billion visits to retail websites. Adobe measures 80% of all online transactions from the top 100 U.S. retailers and uses its predictive model powered by Adobe Sensei to calculate the remaining hours of the day. Seven dollars and fifty cents out of every 10 dollars spent online with the top 500 U.S. retailers goes through Adobe Marketing Cloud.

“Cyber Monday is on track to be the biggest online shopping day ever, surpassing our forecast by almost $27 million or 0.8%,” said Tamara Gaffney, principal analyst, Adobe Digital Insights.

“This indicates that consumers still had more appetite for online shopping despite the incredible volume of online sales on Black Friday. Prices are expected to start climbing after today as retailers shift attention to extend the season late into December with quick shipping deals and the option to click and collect in store.”

•    Out-of-stock items. Out-of-stock messages were at 12%—or 0.7% less than levels seen in 2015 and 1.5% higher than on Black Friday (10.5%). The products most likely to run out include Beats By Dr. Dre Headphones, Garmin Vivofit Jr., Nintendo 2DS with Yo-Kai Watch Game and the Dell Inspiron 15 3000 series for electronics. The Nikon D5300 and KitchenAid Professional were also at risk for running out of stock.

•    Discounts. The highest price drops were seen for televisions (average discount of 21.5%) and tablets (21.3%). Video game consoles showed a slight increase in price since Thanksgiving and Black Friday (0.5%).

Mobile accounted for 56% of visits (45% smartphones, 11% tablets) and 37% of sales (25% smartphones, 12% tablets). Consequently, mobile totaled $3.46 billion in sales. Furthermore, Black Friday became the first day in retail history to drive over one billion dollars in mobile revenue. With revenue of $1.2 billion, it saw a 33% YoY increase. adobe.com