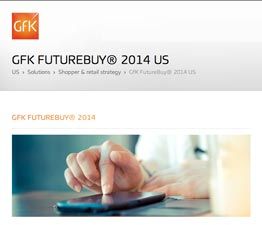 New York, NY—The interplay between online and in-person shopping in the U.S. has tilted slightly in favor of brick-and-mortar retailer. This is according to GfK’s 2014 FutureBuy global study of shopping habits and preferences.

“The big takeaway from this year’s FutureBuy study is how dynamic the shopper environment has become. We are seeing double-digit point changes in metrics designed to measure relatively foundational behaviors, such as omni-channel and devices used to shop,” said Joe Beier, executive vice president of GfK’s Shopper and Retail Strategy team in North America.

“This volatility, combined with significant variability in shopper behavior by category and generation, makes it even more imperative that manufacturers and marketers build out an up-to-date and nuanced shopper insights platform, from which highly engaging and relevant programming can be developed. Without these insights, brands are simply in ‘hit-or-miss’ mode in execution. Given how fast this space is moving, that’s not going to be a formula for marketplace success going forward.”

Incidents of smartphone “showrooming”—seeing a product in a store then buying it online from another retailer using a smartphone—dropped from 37% in the U.S. last year to 28% in 2014. And, according to GfK, “webrooming,” where consumers buy in a store after researching a purchase online using a smartphone, was reported by an even higher proportion of respondents (41%).

Across 15 product/service categories studied by GfK, 44% of U.S. shoppers “reported combining online and in-person shopping activities. This is a jump of 7 percentage points versus 2013. Once limited primarily to big-ticket purchases, this “omni-channel” behavior is surging in even lower priced categories. These include beauty and personal care (reported by 39%), lawn and garden (29%), and food and beverage (22%).”

The study also revealed that U.S. shoppers who made their purchases at brick-and-mortar retailers were motivated by key differentiators. These include: see and feel before buying, 58% prefer brick and mortar versus 9% online; get products sooner, 53% versus 16%; and hassle-free returns, 35% versus 10%. When online was the preferred purchase platform, the leading deciding factors were “save money,” “easier” and “better selection.”

GfK also noted that though “PCs and laptops still account for the lion’s share of online research and purchases, mobile devices (smartphones and tablets) are playing a growing role. Internet shopping via a home computer (PC or laptop) dropped from 78% to 63% in the U.S. in just one year. Furthermore, the use of mobile devices doubled. It rose from 8% to 15% for smartphones, and 5% to 10% for tablets.”

Rises in smartphone shopping were most dramatic among Generations Z and Y. Also, tablets recorded significant upticks with Generation X and Boomers (see Table 2). “Tablets have very consistent (currently lower) usage for shopping across generations, while smartphones clearly skew younger,” according to the report.

Established in 2009, FutureBuy is GfK’s exclusive survey of shopper attitudes and behaviors. The 2014 survey covers 17 countries as well as 15 categories. These include FMCG, domestic appliances, home improvement, mobile phones and a variety of shopper topics. Topics range from omni-channel behavior to leading-edge consumers and mobile payments. gfk.com