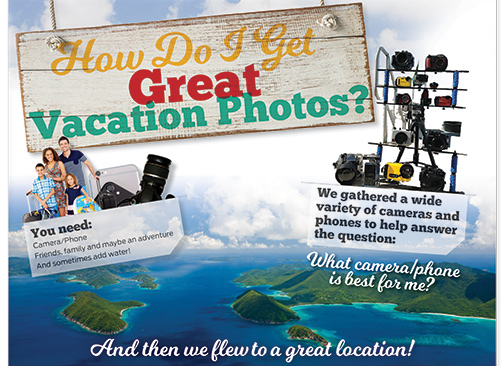 Our goal was to create an article to help sort out which phone or camera is best for vacation photography. And what consumers could do to get great vacation photos. We gathered a wide variety of cameras and cameraphones and then flew to a great location!

We placed particular focus on the feature that attracts much of the attention—taking photos in the water, many without needing additional waterproof protection. What we came up with is this easy-to-follow article that your photo customers can use when shopping for travel cameras as well as improving their vacation photos.

Everything-proof, adventure cameras and cell phones that can go into the water are what drew our attention. We both make our livings in jobs that involve cameras in water. So we tackled the challenge of comparing lots of these devices to help consumers make a more informed choice.

On the first day, we found our first photo subject—a mermaid sunning herself on a rocky outcropping. This allowed us to get some perspectives on the cameras we were using both topside and underwater.

Software capabilities and personal preferences were involved. As a result, there are noticeable differences between the images adjusted with Lightroom and those adjusted with Land & Sea SCUBA.

Digital Photography: Getting the Most from Your Photos

When “photo processing” or “photofinishing,” labs adjust color, contrast and brightness as they print pictures. The words have meaning. “Processing” comes from the olden days when film was “processed,” making magical bits of celluloid ready to be printed. “Finishing” is when the local photo store or mail-away service adjusts color, contrast and brightness when printing.

In the world of digital cameras, if an image is not printed, photofinishing is not done. Today, however, depending on the camera lens, image sensor and photographer, photo-editing software can provide dramatic benefits to your customers’ photos.

After taking topside photographs, we tried to get a bit closer to the mermaid. You guessed it—she dove into the water, which was pretty cool. This allowed us the opportunity to see how these cameras take pictures in the sea!

Taking photos underwater creates challenges that may not be familiar to consumers. Water is 784 times denser than air. Because of this density, light is absorbed much more quickly. The first elements of light to be absorbed are the red and orange colors. The deeper you go or the farther into water that you shoot (distance to subject), the more pronounced is the color loss.

This color loss creates a problem for the logic within the camera. When shot in auto mode, the camera will “guess” wrong every time. The beautiful blue water colors come out as a light powder blue or green.

Additionally, there is a mismatch between our human visual system and the capture system of the camera. Our eyes and brains are very adept at auto white balancing the colors we see—even as we look up, down, close and far away. The white balance for each of these views is different underwater, but our brains seamlessly adjust them, so we don’t see the same way the camera “sees.”

We compared the cameras by setting them to auto mode and also several different shooting modes based upon lighting, location or subject, such as underwater mode. We followed our mermaid out to sea so that we could capture some beautiful vistas.

Mode settings create a combination of adjustments that are predesigned for specific conditions. Some of the cameras we used had underwater modes. These modes are well worth experimenting with and using. Of course, there is always the issue of selecting and using the proper setting. Many times we forget what setting is active, which can actually make the image worse.

Another mode that is frequently used is cloudy mode. When using “cloudy,” you are tricking the camera. On a cloudy day, sunlight is absorbed by the clouds much like it is absorbed by the water. The colors come out bluer and cooler because the clouds filter out the reds and oranges of the sunlight. The cloudy setting adds reds and oranges back into the photo, which is exactly what we also want to do with underwater photos.

In addition to preset shooting modes, some cameras provide manual adjustments. These include manual white balance adjustments to improve photos.

Manual mode allows the shooter to adjust ISO, f/stop and shutter speed. In auto mode, the camera may overexpose the shots because it misinterprets water density for darkness. Photographers can use the manual mode to force the camera to darken the shot using those settings.

There are several ways to deal with overexposure and loss of color:
• Lower ISO/higher f/stop number/faster shutter speed
• Adjust camera mode
• Use external filters (also some cameras have built in snorkel/dive filters or modes)
• Use photo-editing software

Our mermaid had swum off, but we found someone else who loves to play in the sea. Although he is certainly not a merman, using fins instead of a tail, he did introduce us to the stingrays at Grand Cayman’s Stingray City. It should be noted that in most locations, humans should never touch sea life. However, Stingray City in Grand Cayman attracts one million visitors a year to a location that provides a unique, interactive experience—whether snorkeling or diving.

We mentioned earlier that at different depths, light is filtered by the water—losing warm colors first and other colors as you go deeper. These Stingray City photos provide a good example of snorkel-depth photos with underwater settings or filters.

By comparison, the Kittiwake photos were taken down in scuba-depth water with the same cameras. Also note, we adjusted for the foreground metal structure that is better lit in the bottom left than the deeper/farther/less-lit wreck. This will confuse and affect the automatic mode adjustment and the captured image.

The photos taken with the iPhone/LenzO housing and GoPro action cam show that color filters are another way to improve underwater photos.

A filter adjusts warm orange colors in a photo and will help correct the loss of those same color elements in underwater shots. Several of the cameras that we reviewed had underwater mode settings that accomplish a similar effect. Others require (will allow) attaching filters externally. Those filters can be attached or removed as needed.

Below are photos taken with and without snorkel-depth filters. It should be noted that a challenge for filters is that they are “matched” to one particular situation. This can cause filters to make inadequate corrections or add too much red into the photo. As a result, it can make white sand look red—and equally change the color of fish, coral and other subjects.

Many cameras can capture vacation adventures on land and in the sea. Photo improvement software improves most photos. Also, software can reduce or remove the overcast red color that filters can create.

Below are some photos that illustrate this software and the time it took per image to make these corrections. 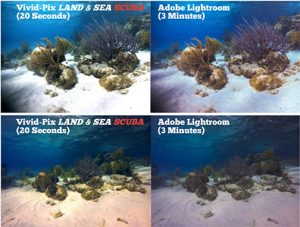 Once a photo is taken and downloaded from a camera, there are several photo-editing programs available that will allow color correction, cropping and sizing. Most of these programs are primarily designed for editing photos shot on the surface. One however—Vivid-Pix Land & Sea as well as Land & Sea SCUBA—is specifically designed to fix photos taken in and under the water, in addition to those shot on land.

Below are a few images that were captured in automatic, underwater mode or using filters. They were then edited using Vivid-Pix Land & Sea SCUBA software.

Coming Up for Air

Our weeklong photo adventure in Grand Cayman was coming to an end. As we were drying off all of the equipment and beginning to pack, we realized we had not gone down to famous 7 Mile Beach! So, we grabbed all of the cameras, and late in the afternoon we went to the north end of 7 Mile Beach. There we shot our final photos above the surface. Below we’ve summed up how all the cameras performed.

Furthermore, we created a matrix to compare photos, shooting modes, specifications and other factors that may help in determining the phone/camera/software that’s best for you. It’s a very large table/matrix, so we did not want to include it in the body of this article, but be sure to check it out here.

POV cameras have created a new type of photography. By wearing them or attaching them to helmets/bikes/boats/cars—you name it—we are able to capture photos and video on the fly. The great news about these devices is you never miss a shot. The bad news about these devices is that you never miss a shot; as a result, you get so much content it’s a job to access, manage and store all the memories. Also, a still image or 10 can be extracted from the videos these cameras record.

In addition, one nuance of POV cameras is fisheye. In order to capture 180º of what’s in front of the camera, the lens often has a curve that causes the edges of the photo to “bend.” This is known as a fisheye effect. Vivid-Pix Land & Sea SCUBA is able to reduce this affect as well as correct color. Note how the rock seawall on the bottom has been adjusted from curved to the actual straight structure.

After our Grand Cayman adventure, we were faced with the task of figuring out how to present all of the information we had collected in a usable manner. We decided that a matrix was the most effective way. It begins with a comparison of the photos we shot with each camera. The photos will enlarge when you place your cursor over them. After the photos is a comparison list of the various camera specifications.

Our goal has been to provide as much information as we could to help consumers decide which camera or phone is best for vacation photos. But we are not going to express opinions as to which camera is “the best.” That is impossible. Every person has different needs, wants and budgets. Furthermore, every person sees photos differently. But we hope we have been helpful.

We both have been around cameras and water for a long time. As a result, we have seen cameras, trips and sometimes budgets affected when cameras were damaged by water. We suggest you recommend that your customer buy an underwater housing for his or her camera, even if it is advertised as being waterproof (or resistant).

Explain that the camera housing is a watertight container that the camera is placed in but that lets photographers manipulate camera controls to take photos. While a housing will add cost to the unit, it will also add value. Better to add a bit of cost than lose a trip’s worth of photo opportunities and memories due to a flooded camera.

Rick Voight is the CEO of Vivid-Pix (vivid-pix.com), a company that makes photo-editing software, including several programs designed for underwater photos. Sandy Sondrol is a professional underwater photographer well known as an underwater photo instructor (sandysondrol.com).