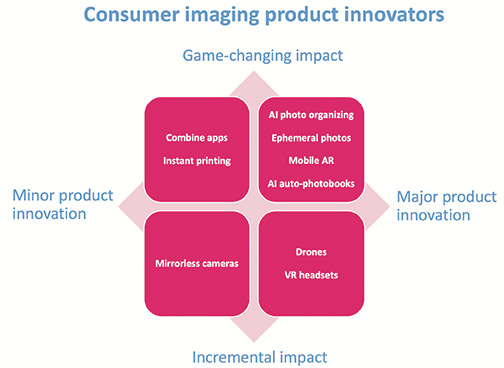 As an analyst who tracks and advises on innovation strategies for consumer imaging companies, the most difficult—and impactful—question is whether particular imaging innovations are slated to “change” the game. Or perhaps they’ll “only” trigger incremental changes.

This question comes up regularly for each stage of the typical consumer imaging journey: photo (or video) capture; enhancement; organizing; sharing; viewing; as well as printing.

Take, for example, a camera that can fly and be remotely controlled. Was that a game-changing or incremental innovation? Or a camera that weighs less and is less noisy than the models we’ve used for many years. How about a photo-sharing app that lets you share images that automatically vanish after the recipient has viewed them? Or consider a new breed of apps that auto-curate and auto-design a consumer’s photo book through the click of a few buttons.

Before we reflect on these and several other examples, let’s define what constitutes game-changing versus incremental innovation. I’d like to do this based on the lessons learned from game-changing innovations outside the world of imaging.

Let’s review the idea of needing to summon a driver to take you for a short ride. You could flag one down or call a taxi company, after which a driver shows up whom you’ll pay when you’ve arrived at your destination. It’s a proven system that worked and still works.

While there were no glaring unfilled needs, innovative companies like Uber and Lyft could still disrupt this true-and-proven market. They did so by enabling customers to use their smartphones to find nearby drivers, accept a ride in these drivers’ private cars, rate the drivers and also pay them through their phone. We all know what a game-changing impact these ride-sharing services have had. Moreover, they will have even more impact when we can summon autonomous vehicles for our rides.

Did this fundamental disruption of the taxi industry require earth-shattering technology? Not really. To start, Uber, for instance, mostly used existing technologies besides their own initial demand prediction model. They used mapping software, payment solutions and various smartphone communication APIs. What made it game-changing was the removal of a seemingly moderate level of friction. This was coupled with aggressive business practices (rock bottom prices to start when these services elbowed their way into often unchartered legal territory), rather than technology innovation.

In fact, technology innovation only later became a differentiator in an effort to raise barriers to entry; e.g., when developing autonomous driving solutions.

There are many other examples of relatively low-tech innovations succeeding in addressing (latent) consumer needs before the companies developed innovative technology to create competitive barriers.

For instance, Netflix launched with the simple proposition to make it more convenient to rent movie DVDs. For a long time, its service was a relatively low-tech affair. Customers could order DVDs on Netflix’s website, which mailed to their homes and returned in a prepaid envelope.

The company coupled this with a transparent “all you can eat but only one at a time” monthly subscription without the customary due dates and late fees. As a result, Netflix took off quickly.

Moreover, only later did Netflix accomplish what was technically much harder. That was streaming videos at a high enough resolution, thus eliminating the need to mail DVDs. A game changer? Ask the former folks from Blockbuster Video or any of your friends who like to binge-watch movies on a rainy weekend.

However, movie streaming by now has also turned into a commodity. So Netflix has moved on by focusing on its next game changer to expand and defend its turf: investing billions of dollars in exclusive original content.

Let’s look at the takeaways: 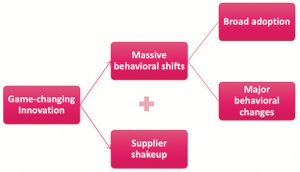 Let’s now review whether nine examples of consumer imaging innovation are primarily game-changing or incremental. (And yes, these are brushstroke and subjective assessments. Have different thoughts? Join the discussion!)

We’ll pick these examples from among each of the stages of a typical consumer imaging journey.

Drones are game-changing in specific vertical B2B markets such as agriculture. However, they haven’t triggered broad adoption among consumers. They’re yet another camera type in the consumer’s potential arsenal of long-tail cameras (suite48a.com/longtail) that address specific use cases.

In other words, no matter how game-changing the technology sounds (a camera that flies!), drones haven’t become a game-changing innovation for the consumer imaging market.

Mirrorless cameras also signify incremental rather than game-changing innovation; they haven’t as of yet led to major behavioral shifts or broad adoption beyond the segment of former DSLR buyers.

With more or less all incumbent camera vendors now offering mirrorless cameras, the vendor lineup isn’t fundamentally different from the one for DSLRs in the past. However, if mirrorless camera users were to use their cameras primarily for taking videos, for which these cameras are well suited, it would be a different equation.

Not only do we see broad adoption, innovative combine apps also enable a major shift in how consumers enhance their photos before sharing them. This is accomplished through multi-format creative expressions rather than as photos by themselves.

The ability to have one’s photo collections auto-organized is fundamentally changing consumer behavior. Consumers can now easily find (or even be reminded of) the photos that matter to them. As a result, it makes sharing, viewing or printing much more feasible. It also makes it more enticing to take an unlimited number of photos. In other words, we’re moving into an era in which consumers can have their beloved photos at their fingertips (suite48a.com/fingertips).

Traditionally, the photo industry has always promoted the idea that photos are consumers’ prime choice for preserving their memories. However, Snapchat’s ephemeral photos innovation in 2002 reversed the logic. Consequently, the images worth sharing are the ones that are short-lived; users can freely share them in-the-moment without concern that others will reshare these photos or they will haunt them in the future.

Too drastic? It took Snapchat a while to develop a solution with an even broader market appeal: the Story format. What’s more, this enables users to document and share their daily lives in a visual format that typically disappears after 24 hours. Other social media and chat services, like Facebook, have implemented their own “Story” format and have seen mass adoption.

VR headsets were prematurely proclaimed as game-changing. While this is true for specific markets (such as training applications or games), VR headsets have failed to trigger mass adoption. And this was even with vendors such as Google offering (almost) free cardboard VR headsets to give consumers a taste of immersive VR content. (Google recently discontinued its Daydream VR platform.)

While the above is also true of AR headsets, augmented reality is taking off in the form of mobile AR (suite48a.com/ar-apps). It provides the ability to see through one’s phone scenes or objects in real life, supplemented with virtual informative or entertaining content.

A fast-growing array of AR applications from games and creative expression to shopping is triggering major behavioral shifts.

The days are gone when photo book providers proudly proclaimed how much time their customers on average spent creating their books. A slew of B2C and B2B solutions now use artificial intelligence to enable consumers to curate and design their photo books within seconds; and through the click of a few buttons. Moreover, this is even doable on small-screen devices such as smartphones.

Is this innovation incremental or game-changing? This one is a tough call, but I lean toward it being incremental, at least for now. Yes, there is a shift toward using these one-click solutions versus their more complicated predecessors. However, one could argue it is an incremental change and we don’t yet see a massive increase in the number of photo books being created.

Yes, some new suppliers have come to market, but B2B start-ups also license their innovative technology to incumbents; i.e., the supplier lineup was not fundamentally disrupted.

Instant print cameras or printers have more elements of being game-changing. It’s not so much the invention of new technology that created mass adoption of instant print products; Polaroid(-like) printing has been around for a long time. Rather, the innovation has come from smart targeted marketing that leverages today’s youngsters’ infatuation with photography, coupled with the popularity of anything retro. 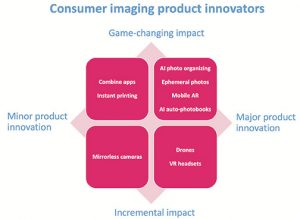 In summary, it is easy to mislabel technically innovative new products as game changers. Some are; some are not. Likewise, some relatively low-tech innovators are game changers; others are not.

Hans Hartman is chair of Visual 1st a global conference focused on promoting innovation and partnerships in the photo and video ecosystem. He is also president of Suite 48 Analytics, a market research firm focused on the consumer photo and video market.