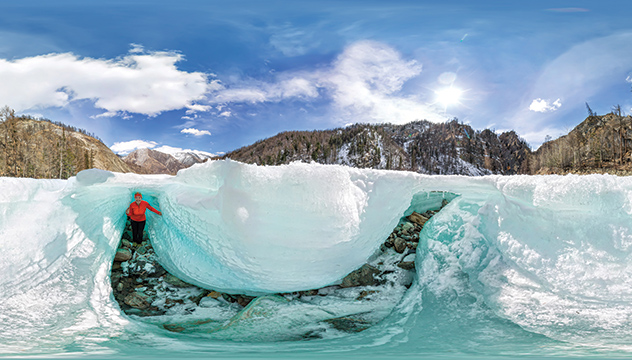 The consumer electronics industry is evolving every day, and the world of cameras is no exception to this trend. We’re seeing incredible things happen with photography. Recent products like the GoPro Fusion and Ricoh Theta V cameras are doing tremendous things to push the industry forward. But despite all of their advancements, there’s one thing many recent cameras are claiming to accomplish that they simply don’t: virtual reality.

As manufacturers, we are part of the group who will set the trend for how each technology is perceived by the public. It is our responsibility to help define the lexicon. But even this deep in the camera industry, there seems to be confusion at the highest levels about what virtual reality (VR) is and how it differs from 360º camera technology. As a result, this confusion is being passed on to the consumer. It is leading many to think that the terms “virtual reality” and “360º” are synonymous. They aren’t.

While 360º-capable cameras can produce photos and videos that can be viewed in a virtual reality headset, they output traditional 2D images. In a word, they’re “flat.”

These cameras excel at creating fully surround images that users can explore on devices such as smartphones and tablets. Or, in the case of the Ricoh Theta V, they can even be viewed on a TV. But at the end of the day, this isn’t virtual reality.

VR cameras differentiate themselves by creating a sense of depth, recording their footage in full 3D. This creates a wildly different sense of immersion. Sight and sound are used to trick the brain into feeling like it’s been transported to another world. Unlike 360º-capable cameras, which limit users to looking at captured footage, VR lets them step into the footage. It’s a totally different experience.

Despite this distinct difference between 360º cameras and virtual reality cameras, when it comes to marketing new products, many companies are taking the former and claiming them to be the latter. We are seeing 360º-capable cameras that produce flat 2D images with the label “VR” right on the box. Whether a clever deception or a genuine misunderstanding, this mislabeling of products only fosters consumer confusion about this growing space of the market.

While the end user may not understand the difference between 360º and VR, manufacturers should. And it’s our responsibility to educate the consumer properly by coming together to create standards by which each term applies.

Admittedly, this would be an easier distinction to make if the technologies weren’t so similar on paper. But it is this similarity that demands we do a better job of explaining the differences to consumers.

Perhaps the terms “virtual reality” and “360º” are at the root of the problem. After all, both conjure up a similar image in the minds of end users. Both 360º and VR camera technologies capture footage in 360º. Both let the user look around the environment by turning his or her head in 360º space. How can we help consumers understand that, despite these similarities in product descriptions, the realities of each are as different as night and day.

If the solution is that we need new terminology for these cameras—and I’m not sure that it is—then we need to start a conversation about what those terms might be. In the end, we need to be using words that can eliminate the confusion gap entirely for manufacturers and consumers alike. If we don’t need new words, we need consistent application of existing terms for these products across the industry. Consistency is the key to clarity.

No matter what form the solution takes, we need to find it soon. Virtual reality is on the precipice of mass consumer adoption. Leaving consumers unclear of what sets it apart from 360º video is only going to harm the industry at large.

Looking at the accomplishments of our peers, it would be foolish of me to discount the amazing steps forward that cameras like the Ricoh Theta V and GoPro Fusion, among others, represent. Allowing users to wirelessly transmit 360º videos to a television puts the Theta V in a class of its own. And the GoPro Fusion is poised to reinvent video editing with GoPro’s OverCapture technology. This feature essentially turns videography into a post-capture task.

However, despite all of their progress, claims that these cameras can produce output in VR, without 3D capabilities, are simply unfounded. If we genuinely disagree on what VR is, then it’s time to settle that debate. There is a pretty clear distinction between 360º capture and virtual reality capture. This is true both in created output and intended end-user engagement. If we intend to foster the understanding and adoption of VR technology, it is our responsibility as an industry to educate the consumer on the difference.

Editor’s Note: Jim Malcolm brings more than two decades of imaging, virtual reality and consumer products experience to his role as general manager, North America, at Humaneyes. In addition to establishing the business operations of the company in North America, he is responsible for managing the launch and success of their Vuze VR camera—the company’s 3D 360º VR solution. Malcolm is also the founder of Xiality. The visual imaging company focuses on resolving technology hurdles that are slowing the adoption of VR applications. Previously, he was the president and CMO of Ricoh Imaging Americas Corporation.

This article first appeared on VentureBeat.com