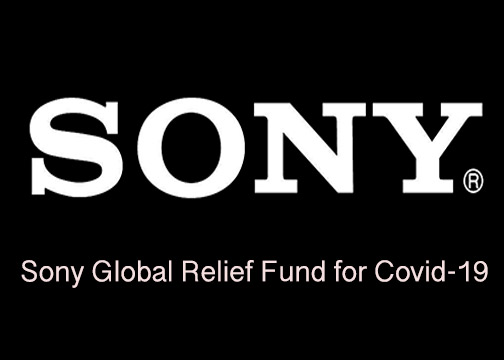 San Diego, CA—Sony Corporation is making several donations to leading organizations in the production industry. The Sony pandemic funds help mitigate disruption of the creative community as a result of the Covid-19 crisis.

Funding for the worldwide program is provided by the Sony Global Relief Fund for Covid-19. Sony announced the relief fund in April to help those affected by the pandemic. Moreover, the company will contribute globally to various organizations in North America, Europe and Japan. It will also provide donations at a regional level to support Sony’s Imaging Pro Support program.

Furthermore, recipient organizations will utilize the donations to ease the financial hardships affecting industry creators. They include cinematographers, camera operators, camera assistants, digital imaging technicians as well as others who create media for sports, movies and episodic content.

“In these challenging times, we are eternally grateful to healthcare workers, essential workers and others on the frontline of combating this pandemic as well as supporting the essential needs of our society,” said Mike Fasulo, president and chief operating officer, Sony Electronics Inc.

“Content creators are the critical backbone of the entertainment ecosystem; Sony’s business success is tied very closely to their well-being and success. We are gratified to lend Sony’s support to organizations enabling creators to continue their artistic expression. We also look forward to seeing the results of our shared collaboration.”

The communities that will receive financial support in North America include the following.

Founded in 2006, the SVG is an international association for sports television professionals. Moreover, its mission is to advance the creation, production and distribution of sports content.

The SVG is the producer of the Sports Broadcasting Hall of Fame and 12 other industry events, as well as numerous media properties and industry initiatives. What’s more, it represents more than 4,000 active participants in the creation of sports content for TV, the Internet, mobile devices and in-venue distribution.

In 2012, the Sports Video Group created the SVG Sports Broadcasting Fund; it was the sports industry’s first charity fund to provide assistance to industry professionals and their families in need. Since its inception, that fund has assisted hundreds of sports production professionals who were unable to work due to injury, illness or disaster. The money Sony is contributing to the SVG Sports Broadcasting Fund will also help offset medical expenses for members of the community who are impacted by Covid-19.

“We would like to thank Sony for its overwhelming support of sports production professionals who are facing tough times due to the Coronavirus Pandemic,” said Ken Aagaard, chairman, SVG Sports Broadcasting Fund. “Sony’s generosity points to the strong bonds that unite our industry during times of crisis and can help those in need. With Sony’s support, we will make a difference for sports production professionals and their families who find themselves challenged in unprecedented ways.”

The first cinematographers’ union was established in New York in 1926; unions in Los Angeles and Chicago followed. However, it wasn’t until 1996 that Local 600 was born as a national guild. Subsequently, ICG’s ongoing activities include the Emerging Cinematographer Awards and the Publicists Awards Luncheon. The guild also publishes the award-winning ICG magazine.

“I want to thank Sony for their significant donation to the Local 600 Hardship Fund, which is administered by the Actors Fund, to provide aid to so many of our members who have suffered financially during our industry’s shutdown,” said John Lindley, ASC, president of the International Cinematographers Guild – IATSE Local 600.

“Behind the corporate logo, there are individuals whose desire to lend our members a hand is inspiring and brings us all closer together. Sony’s unwavering support of our craft during a period of dramatic technological changes is now matched by their generosity. Furthermore, I look forward to continuing our longstanding relationship as our members get back to work.”

“The International Cinematographers Guild is thrilled that Sony Electronics is giving back to the film and television industry in Canada,” commented David Rumley, business representative, International Cinematographers Guild – Locals 667 and 671. “Their generous donation to the AFC (formerly the Actors’ Fund of Canada) will help many members of our community. With film production shut down across Canada, the AFC is a crucial lifeline for workers that need immediate assistance.”

Michelle Yardley, president of Local 669, added, “Since March 14th, the AFC has distributed more than $800,000 to film workers; it continues to provide emergency funds. The need has never been greater, as this amount is four times its normal yearly disbursement. Local 667, Local 671 and Local 669 have also continued our support of the AFC in this trying time. We thank Sony Electronics for stepping up and making a difference.”

The American Society of Cinematographers

Established in Hollywood in 1919, its purpose is to advance the art and science of cinematography. The organization also brings cinematographers together to exchange ideas, discuss techniques and promote the motion picture as an art form.

“The ASC is immensely grateful for Sony’s donation; it comes at a time when cinematographers and the entire filmmaking community are under such pressure from the pandemic,” said Terry McCarthy, CEO of the American Society of Cinematographers. “The funds will help us to produce an online video series about cinematographic topics; provide employment to those directly involved; and also help a broader audience learn about the principles of cinematography.”

The Canadian Society of Cinematographers

Since 1957, this not-for-profit organization’s mission is to foster the art and craft of cinematography and imaging professionals at all levels. CSC members are involved in the production of feature films, documentaries, television series, specials and also commercials.

Moreover, volunteers administer the society and strive to reflect the diverse character of its membership. Its mandate supports a full agenda of training, education and mentorship. It also disseminates the latest in technical as well as product information.

Globally, Sony will also invest in financial assistance for Sports Video Group Europe; IMAGO; as well as the Japan Society of Cinematographers in Japan.

In addition, beyond the Covid-19 pandemic, Sony remains committed to furthering its support of creators and their activities. Consequently, Sony Imaging Pro Support members in North America can continue to take advantage of the recent complimentary six-month benefits extension; the benefits will help reduce creators’ ongoing operational costs.