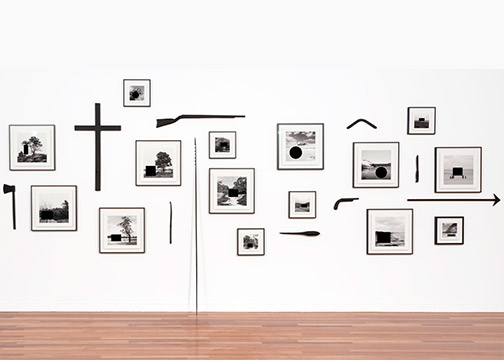 Rochester, NY—The George Eastman Museum is presenting James Tylor: From an Untouched Landscape. The photographic exhibition is on view through June 5, 2022. Moreover, the first solo exhibition of artist James Tylor’s work in the U.S. highlights under-told and often unseen histories of Aboriginal peoples.

James Tylor (b. 1986) is a multidisciplinary artist with Nunga (Kaurna Miyurna), Māori (Te Arawa) and also European ancestry. Trained as a carpenter as well as a photographer, Tylor takes his practice beyond those mediums to communicate his understanding of history and the contemporary moment; and to contribute to the revitalization of his Kaurna culture.

The landmass now known as Australia was known by many names to many distinct peoples. Reflecting this, Tylor takes an expansive approach to landscape. He incorporates his Kaurna knowledge into its presentation, and to the photographic medium, through use of technologies old and new.

“In Tylor’s hands, photography, once used to survey Aboriginal lands and peoples, becomes a way to indigenize landscapes,” the museum announced. Furthermore, From an Untouched Landscape is an indigenous exploration of place, reframing landscape on and near the Kaurna Yarta Nation’s traditional homelands. That is where Tylor’s Kaurna Miyurna people trace their roots since time immemorial.

The exhibit features daguerreotypes etched with Kaurna place names; photographs of significant sites for Aboriginal peoples as well as sites of colonial encounters and violence, with black velvet shapes blocking the full view; and indigenous and colonial-era objects carved by the artist.

We Call This Place … Kaurna Yarta inserts Kaurna Miyurna place names, etched on sweeping daguerreotype views of coasts and hills. The continuing series also focuses on significant sites for Aboriginal peoples as well as sites of colonial encounters and violence.

Further, Removed Scenes and Vanished Scenes show these sites only partially, with black velvet shapes blocking the full view. To further contextualize these works, Tylor sculpted wooden Kaurna objects, including shields, spears and colonial-era tools, such as guns and harpoons.

The exhibition is guest-curated by Marina Tyquiengco (CHamoru), assistant curator of Native American Art at the Museum of Fine Arts, Boston.