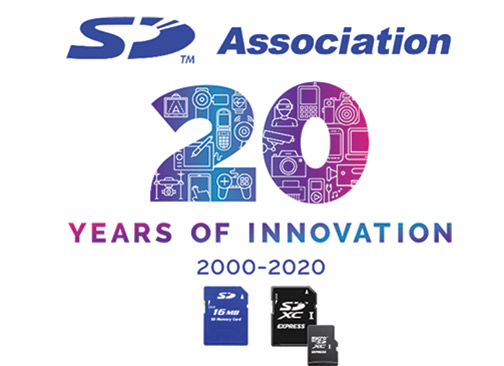 San Ramon, CA—The SD Association (SDA) is celebrating its 20th anniversary in 2020. The organization launched 20 years ago with a mission to reinvent the memory card and make life easier for consumers and businesses everywhere. In addition, the SDA is now a global ecosystem of nearly 850 technology companies charged with setting interoperable SD standards.

Throughout the years, SD memory cards evolved, expanded capabilities and became the number one card of choice. Today, these cards play a critical role in a variety of devices and uses unimagined 20 years ago.

The family of SD memory cards gives consumers and business users a choice; it offers portability, upgradeability and interoperability in consumer electronic devices. Moreover, SD memory cards are the de facto storage device for billions of products in this mobility era when more storage is required.

What’s more, 20 years ago, the memory card marketplace was a confusing mix of about a half-dozen, mostly proprietary card options. They were incompatible with each other as well as lacked interoperability across different devices. As a result, the SDA was created to develop a technology standard to meet growing consumer electronic demand. It’s mission was also to foster an ecosystem for collaborations and growth among all device manufacturers.

The founders of the SDA were Matsushita (now Panasonic); SanDisk Corporation, now owned by Western Digital; and Toshiba Corporation, whose memory division spun off as KIOXIA Corporation.

“When the SD Association launched 20 years ago, the three founding companies were truly visionary; they saw how the amazingly small SD memory card could make a significant impact on the way we store digital data in the 21st century; ultimately creating a de facto standard for the next generation of digital media,” said Yosi Pinto, chairman, SD Association. “The SD specifications have not only driven the standardization of memory cards for the benefit of the consumers but also continued to evolve and expand capabilities to meet industry demands; positioning SD as the most recognized and trusted brand for removable storage.”

Remarkably, the first SD card sold 20 years ago provided just 8 megabytes of storage capacity. Thanks to huge advances in memory technology, today SDXC or microSDXC cards are available at 1 terabyte; that is a ~125,000 times capacity increase over the first SD memory cards.

“By creating SD technology, the SDA helped established a standard to further commercial and consumer businesses into a robust ecosystem that continues to grow,” added Hiroyuki Sakamoto, president of the SD Association. “With the recent SD Express, microSD Express and SDUC standards, the SDA has developed a roadmap that will serve everyone for years to come.”