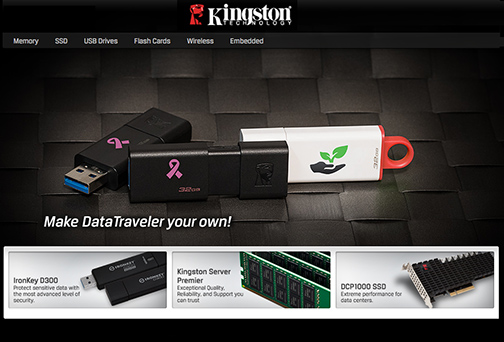 Fountain Valley, CA—Kingston Digital, Inc., the flash memory affiliate of Kingston Technology Company, Inc., exhibited at Supercomputing 2017 (SC17). A provider of flash memory products, the company is reflecting on its 30 years in the technology industry.

At SC17, the technology company and its partners demonstrated the data performance of its forthcoming DCU1000. It is billed “the industry’s fastest NVMe PCIe SSD in the U.2 form factor.”

The DCU1000 is purpose-built to predictably accelerate the workload data demands of 8K video rendering and high-performance computing (HPC) for the era of artificial intelligence (AI) and the Internet of Things (IoT), as well as legacy enterprise software and the latest big data applications.

“Today’s supercomputing installations are capable of doing billions of calculations per second as well as managing data in enormous volume and velocity. Kingston continues to provide top data solutions with reliability and predictable performance for the world’s most powerful HPC and enterprise big data applications, while also laying the groundwork for future innovation in data center efficiency.”

The company delivers end-to-end server memory and NVMe PCIe data performance solutions to feed the data-hungry HPC deployments. They drive everything from big data and government intelligence to media as well as entertainment.

The company was founded in October 1987. To mark its anniversary, it released an infographic. The graph tracks its evolution across three decades. Moreover, it culminates in Kingston becoming one of the most complete providers of end-to-end data performance solutions.