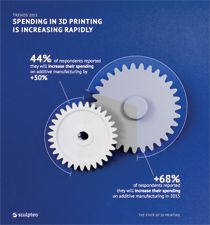 Framingham, MA—The 3D segment of the printer market is poised to take a major step forward. Adoption rates are increasing and solutions are becoming more viable. According to a new survey by International Data Corporation (idc.com), 90% of respondents at companies that utilize a 3D printer are “very satisfied” with their experience. A recent survey by 3D printing provider Sculpteo concurs with these findings.  Furthermore, independent analyst Canalys projects the 3D printer market will grow 56% in 2015.

The Sculpteo (sculpteo.com) survey of more than 1,000 respondents, with professions ranging from food processing to aeronautics, reveals that businesses plan to increase their spending on 3D printing significantly. “44% of respondents polled plan to increase spending on 3D prints by at least 50%. 68% expect an overall increase in the upcoming year. The expected increase is noted across several industries, supporting the fact that additive manufacturing is growing annually and in all sectors.”

Manufacturing and large companies represent the most promise for 3D printer sales; however, new pockets of opportunity will continue to emerge. “These printers are typically acquired for a specific creation workflow. But once in place, the usage expands rapidly to other types of applications,” said Keith Kmetz, vice president, Hardcopy Peripherals Solutions and Services, IDC. “The early adopters who recognized the substantial cost and time-to-market benefits of 3D printing have carried the day. But it’s their overall satisfaction and the ability to expand usage that will ultimately drive 3D printing to the next level.”

IDC survey findings also indicate that features such as ease of use and service/support are nearly as important to respondents as price. They also indicate that a direct vendor-to-customer relationship is key. But this varies from company size as well as vertical market.

Canalys research analyst Joe Kempton agrees. “As we expected, the 3D printing market has grown substantially over the past few years. We have seen improving print speeds, a wider range of materials and new forms of additive manufacturing methods. There has also been a substantial increase in the number of vendors entering this space, with many coming from Asia. This is challenging the previous dominance of 3D printing hotspots such as Germany and the USA. Alongside this, we have seen more ‘traditional’ technology players becoming increasingly involved in the market. This has brought accelerated growth, which accounts for the fast evolving nature of the industry.”