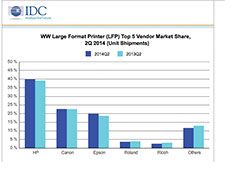 Shipment value, however, declined slightly to $786 million in the quarter with a year-over-year falloff of -0.5%. IDC attributed the growth in unit shipments was driven by solid results for the top three vendors: HP, Canon and Epson.
The top three regional markets posted year-over-year growth for the second consecutive quarter in 2Q14, with Western Europe leading the pack at 11.1%, followed by the U.S. at 6.2% and Asia/Pacific (excluding Japan) at 3.7%.

“IDC expects the aqueous color inkjet market to grow at a single digit rate over the next two years. The technical segment of the large-format printer market is the real driver of growth opportunity. The gains in the technical segment can be attributed to improved speeds and image quality,” said Phuong Hang, program director, Worldwide Large Format Printer Tracker.

The graphics application of the large-format market is a driver of growth opportunity, asserts IDC. This segment grew 10.3% year over year to more than 31,000 units shipped. Similar to the technical segment, all regions except Central Europe, the Middle East and Africa (CEMA) experienced year-over-year growth in this segment. Western Europe posted the greatest gains in both unit and shipment value, 23.4% and 14.6%, respectively.

Among the leading vendors, HP remains the global large-format printer market leader with more than 30,700 units shipped and 39.9% share, according to IDC data. Its year-over-year increase of 7.4% was helped by positive gains in the technical (5.7%) and graphic (18.0%) segments. “HP continues to lead the technical market, with almost twice the unit shipments of its next competitor, Canon. HP also maintained its second place position in the graphics market behind Epson,” noted IDC.

Canon is the second ranked LFP vendor with more than 17,000 units shipped and 22.6% share. It grew 5.8% year over year. This positive growth was driven by year-over-year gains in both the technical and graphics segments, 3.5% and 13.5%, respectively.

Roland was the number four vendor in the worldwide LFP market, according to IDC. It had more than 2,700 units shipped in 2Q14. The vendor declined 2.9% year over year and held a 3.6% share of the overall market. Graphics application is Roland’s main market.

Ricoh rounded out the top five vendors. It posted a 2.5% share of the worldwide LFP market with unit shipments declining -11.7% compared to a year earlier. Ricoh holds the top four spot in the technical market, where it saw a -12.1% year-over-year decline.

International Data Corporation (IDC) is a global provider of market intelligence, advisory service, and events for the information technology, telecommunications and consumer technology markets. More than 1,000 IDC analysts provide global, regional, and local expertise on technology and industry opportunities and trends in over 110 countries. IDC is a subsidiary of IDG, a leading technology media, research and events company. idc.com