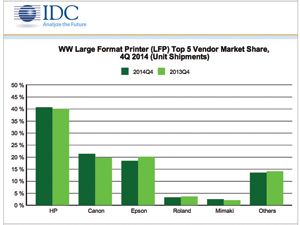 Framingham, MA—New data from International Data Corporation’s (IDC) Worldwide Quarterly Large-Format Printer Tracker indicates that large-format printer (LFP) shipments grew 3.5% in 2014 compared to 2013. In addition, revenue from those shipments was down by less than -1%, attributed to product mix changes and aggressive price promotions.

“The fourth quarter is often the strongest quarter of the year for the wide-format digital printer market in some segments and some geographies, particularly due to the aggressive promotion by major manufacturers and distributors,” said Phuong Hang, program director, Worldwide Large-Format Printer Tracker.

“Shipment growth is an important indicator for the overall wide-format market because even though hardware revenue declined slightly, the vast majority of the decline came from inkjet products, and with inkjet products a great deal of revenue is driven by the consumption of supplies.”

Across all technologies, according to IDC, “wide-format graphics printer shipments grew 2.1% year over year in 2014. Continued decline in the conventional aqueous inkjet printer market was offset by growth in the latex, eco-solvent, dye-sublimation and UV-curable inkjet printer market segments.”

The top five suppliers to the wide-format printer market remained unchanged in 2014. However, within the segments, IDC saw small changes in market share among the vendors.

HP remained the global leader with strong performance in the technical market and dominance in the Latex segment.

Canon maintained its number two position with 20% market share based on worldwide shipments.

Epson was the number three worldwide supplier and is seeing growth in its new dye-sublimation and technical printers.

Roland was the fourth-ranked supplier based on its strength in the eco-solvent business. It also has a growing presence in the UV-curable and dye-sub markets.

Ricoh’s strength in the wide-format toner-based market combined with its growing technical inkjet printers, gave it the number five spot.

Those five made up more than 80% of global wide-format shipments in 2014 but only two-thirds of revenue. “With manufacturers like HP, Canon, and Epson dominating the aqueous segment, this points to the maturity of the conventional aqueous graphics and solvent inkjet markets and the fragmented nature of the wide-format UV-curable inkjet segment,” noted IDC. idc.com