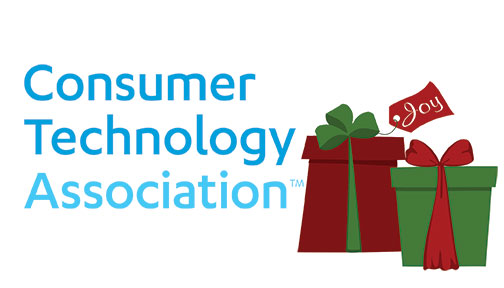 CTA’s 2016 Pre-Black Friday Survey reveals a 10 percentage point increase in the number of American adults who are planning to buy technology products from the Monday before Thanksgiving through Cyber Monday (November 21–28, 2016). 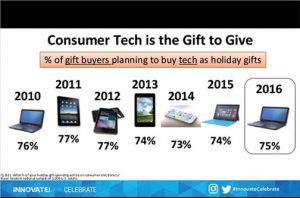 Fielded after the 2016 U.S. presidential election, the survey findings also indicate that the outcome of the election “will not significantly impact the timing of consumer holiday shopping plans.” According to CTA, only 12% respondents said they plan to shop later this year because of the election.

“By all accounts, the 2016 Black Friday week looks like it will be a record breaker for tech,” said Shawn DuBravac, PhD, chief economist, CTA. “Even with delayed promotions from retailers and manufacturers, and signs of preelection uncertainty, we expect consumer enthusiasm for technology purchases during the holidays to be higher than ever.”

CTA’s survey found that among U.S. adults intending to purchase tech products during the week of Thanksgiving, the top 10 products shoppers plan to buy are:

“Outside of the tech perennials—TVs, laptops, smartphones—expect to see front page circular deals from a variety of retailers on emerging products, including drones, virtual reality and digital assistant devices such as the Amazon Echo or Google Home,” added DuBravac. “On average, half of the unit volume of newer, emerging categories sells in the fourth quarter alone—a promising indicator for these new and innovative products.”

Over the course of the fourth quarter holiday season, CTA projects strong U.S. sales for the following categories.

In total, according to CTA, a record 180 million U.S. adults plan to shop during Black Friday Week. Of those, 46% percent—114 million people—said they plan to shop online. More than two-thirds, a whopping 70% percent, of online shoppers intend to use mobile devices. However, most Black Friday week shoppers told CTA they still plan to shop at a physical store (54%).

CTA’s 2016 Pre-Black Friday Survey was designed and formulated by the Consumer Technology Association. It represents the findings of the study conducted November 10–13, 2016 using a combined landline and mobile telephone sample consisting of 1,011 U.S. adults. cta.tech