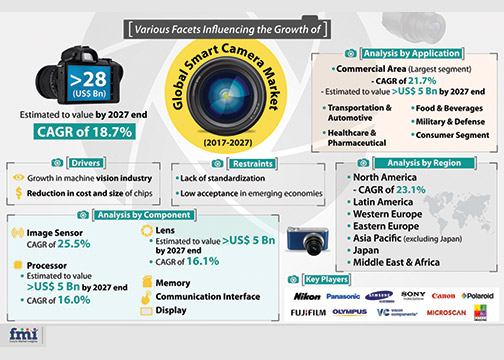 Valley Cottage, NY—Smart cameras, also called intelligent cameras or connected cameras, are the subject of an infographic by Future Market Insights (FMI). Technological advancements in the camera industry as well as the machine vision industry resulted in the evolution of smart camera technology.

Smart cameras not only allow users to capture images but also extract images, get real-time views and share those images. FMI believes that smart cameras have various consumer as well as industrial applications that help drive the growth of the global smart camera market.

According to FMI, the global smart camera market was estimated to be worth $25 million in 2014 and is expected to reach $28 billion by 2027. This reflects a CAGR of 18.7% during the forecast period.

Moreover, image sensors will see a CAGR of 25.5% over the forecast period. In addition, the lens component market was valued at $604.9 million in 2014 with a 24.5% market share. FMI expects it to dominate throughout the forecasting period, reaching $5 billion by 2027 with a CAGR of 16.1%.

Image processors made up the next largest component in terms of market share; i.e., 22.5% in 2014. FMI estimates processors will also reach $5 billion by 2027, with a CAGR of 16%. The display component market also is likely to exhibit its highest CAGR of 26.2% through 2027, with rising year-over-year growth through the forecast period, asserts FMI.

In addition, FMI segments the global smart camera market on the basis of application. The consumer segment was the largest application; it accounted for 26.3% market share in 2014. However, FMI asserts it is likely to lose market share by 2027 to commercial applications.

Geographically, the market is divided into seven regions: North America; Latin America; Western Europe; Eastern Europe; Asia–Pacific (excluding Japan); Japan; and Middle East & Africa. The Asia–Pacific region was largest in terms of market size in 2014 with a 32.7% market share; however, FMI now forecasts a CAGR of 23.1% in North America.

Furthermore, FMI states that the major driving factors for growth in the global smart camera market include: the increasing adoption of home and industry automation systems; technological advancements from the camera industry; the reduction in cost and size of chips; and a growing electronics and semiconductor industry. On the other hand, FMI believes the high cost of single-chip smart cameras and the lack of software applications are two factors restraining the growth of smart cameras.