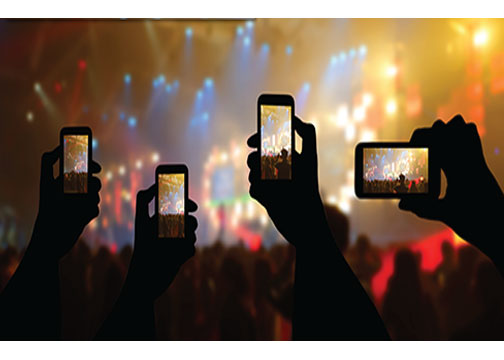 If there’s one recent product that has changed the direction of photography the most, it’s the smartphone. Not only has the smartphone camera unleashed a new generation of snapshooters and citizen journalists, it’s created a whole new ecosystem of apps, accessories and services with valuations in the billions of dollars.

Major smartphone vendors—Apple, Samsung, LG, Google—feature photo and video capture as the main features of their new handsets, to the exclusion of other functions (like making phone calls). Maybe we should stop referring to them as smartphones and call them “smartcameras” (that make phone calls).

This is the time of the year to dust off the crystal ball and look to coming trends. For 2017, the trends are looking to include some new hardware configurations and capabilities to drive consumer upgrades. This accelerated activity is necessary because the camera is becoming more and more of a differentiator between brands and products.

“The camera is probably the most-used feature on a smartphone. But there’s no way for vendors or carriers to make money off the camera itself,” says Carrie Sylvester, mobile imaging consultant for InfoTrends. As a result, technology advances like low-light capability, optical image stabilization or multiple sensors are ways to push consumers to upgrade sooner. 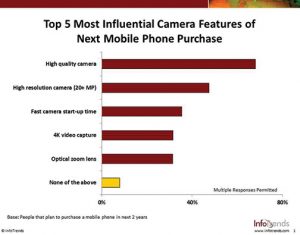 “Smartphone manufacturers are certainly placing more emphasis on improving the camera/photography features. They see this as a way to differentiate from the competition and encourage users to continue upgrading every one to two years,” says Arun Gill, senior market analyst, Futuresource Consulting. “This has been evident with impressive dual-lens models from Huawei, LG and Apple this year.

“We expect 1.6 billion smartphones to be shipped globally in 2016. And this will rise to 1.7 billion units in 2017,” he adds. “Dual-lens is likely to represent approximately 2% of overall smartphone volumes this year and rise to 6% next year (2017).

“In the short term (i.e., the next one to two years) this feature is likely to remain limited to the most premium models in the product lineup for most vendors. Although beyond this period, we would expect the cost of dual-lens components/production to fall. Consequently, we’ll see many more vendors incorporating this feature into a much wider range of their models.”

Multi-lens cameras have been on the horizon for a while, like the now-delayed Android-powered Light L16. Their application in a smartphone opens up intriguing possibilities beyond snapshots, like virtual reality (VR), augmented reality (AR) or 3D imaging. None of these technologies has broken through the mainstream, other than in niche markets like gaming or entertainment. Adding lenses to the Android or iOS ecosystem could be the necessary jumpstart.

Sylvester adds that a new technology does not necessarily spur growth. She cites the “3D boom” from a few years ago as an example. Despite the hype, 3D entertainment didn’t ignite a new era in CE growth but merely became a niche feature. “I do think, however, AR/VR is going to be real, because users will be able to see it and touch it. It’s about the feeling. But there is also a problem that the cheap headsets maybe give people a bad experience,” Sylvester notes.

“The use of dual-lens is likely to support the adoption of AR because two cameras provide the differing levels of depth required to create a 3D image/video. Google’s Tango software platform is one of the first groundbreaking examples of consumer AR. The software makes devices more aware of the world around them. With online shopping, a 3D camera can be used to store a full body image on a smartphone and then users can visit the retail website to try clothes on virtually.

“There are some physical hardware challenges for the initial AR devices. This can be seen with the Lenovo Phab 2 Pro (with Tango software), which is fairly large due to the amount of AR sensors required on the rear. But we certainly expect lots of developments within non-photography AR moving forward,” Gill adds. “We have seen some examples of 360/VR smartphone cameras already this year. For example, the ProTruly (released in China) utilizes two wide-angle cameras, one on the front and one on the rear. Combined with sophisticated algorithms, it is able to record 360º video and 360º panoramic pictures.”

Focus on the End User

Where the first digital cameras had mode dials to set up the proper exposure, today’s smartphones capture scenes intelligently, and use impressive processing power to bring out the desired results.

“Today’s smartphones improve images on the backend. Modes used to set up photos; now the camera is basically a digital computer and determines the best shot, based on light,” says Repice. “As technologies advance, it takes the technology out of the hands of the end user. Most cameras are set for HDR out of the box.”

Software trends are about reducing complexity for the user,” adds Suzanne De Silva, product manager, Mobile, at Samsung Electronics America. “Complex computations can make the best picture decisions, which helps reduce the friction for the user.”

De Silva adds Samsung pays close attention to “enabling use cases” for consumers. These can include obvious needs, like editing functions, as well as less obvious ones. “We want to enable use cases to address a latent desire—like how to take a picture by just a double-tap of the home key—to make it better. We have really focused on the native camera experience, to reduce the number of steps needed to get to your goals, like applying a filter with a swipe. We’re trying to distill the best of the editing and filter apps, and reduce the friction for the end user.”

Repice adds it’s a balance to find the right application of technology to solve a problem. “To improve low-light pictures, you could do that with two lenses or you could do it in image processing. It’s about making the end user happy.”

InfoTrends’ Sylvester acknowledges the smartphone has indeed cut into the market for compact cameras. But she adds that consumers’ experiences with high-end photography on their phones creates interest in other kinds of cameras. These can include interchangeable-lens models, action cameras and even drones. “Smartphones introduce users into the broader world of imaging,” she says. “The mobile phone might be eliminating a need for a personal camera, but now it is also a complementary device.”