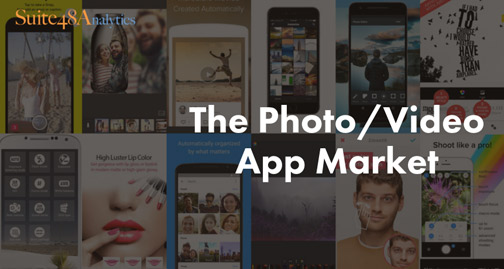 Los Altos, CA—The number of photo and video apps on the market exceeds 78,000, more than twice as many as two years ago, and is increasing. With this in mind, Suite 48 Analytics asked: what competitive advantages characterize the current breed of top-ranking photo and video apps? What is their main use case, their user rating, how long have they been on the market, and what media types do they support? 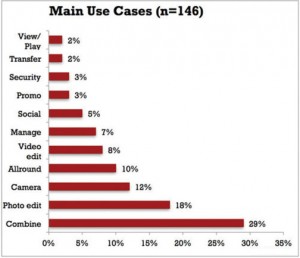 The findings? The most frequent use case among top-ranking photo/video apps is “Combine” functionality that lets users combine photos with other photos, video clips with other videos, or photos with videos (see above graph). Combine apps can also combine photos or videos with text, frames, stickers or clipart. According to the survey, 29% of the top-ranking photo/video apps have Combine as the main use case, followed by 18% that primarily offer photo editing.

In addition, the study’s cross-tab analysis reveals that Combine apps have a larger portion of 4.5 or higher user ratings than any other use case category.

According to Hans Hartman, president of Suite 48 Analytics, the popularity of Combine apps signifies that smartphone photographers’ needs have surpassed plain photo editing or capture. “As photos have rapidly become a prime communication medium through chat, messaging and other photo-centric communication tools, smartphone users increasingly make pragmatic decisions on how to maximize the visual impact of their photos, whether they combine them into a collage, mix them with video clips, or add text or graphical elements.”

The study also looked at how photo app developers can monetize apps, such as by charging for the app, placing ads, selling photo print products or offering features through in-app purchasing (IAP) options—without diminishing ratings.

“First of all, we found that IAP is on the rise: currently, 49% of the top-ranking photo/video apps offer IAP, compared to only 37% two years ago,” said Hartman (see below chart). 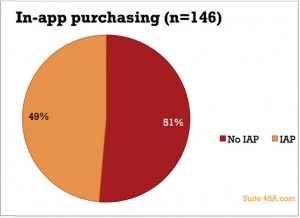 The research firm analyzed cross-tabs between IAP and nine other variables to see if the occurrence of IAP is more prevalent for certain segments: main use case (such as camera apps, photo-editing apps, or photo-organizing apps); app age; user ratings; app price; top ranking on one or both platforms (iOS and/or Android); where the developer is based; size of the developer; OS; and payment (paid vs. free).

Hartman highlighted two cross-tab findings. “First, apps with IAP are over represented among apps with the highest user ratings. On first glance, this seems counterintuitive: you’d expect apps with IAP to be over represented among lower rated apps, as users might be disappointed that not all features are included without paying (extra). We suspect that in reality higher rated apps can afford to monetize their apps through IAP without the ‘pay extra’ features threatening their popularity.”

The second finding involved how long the apps were on the market. “The majority of apps two years or older offer IAP; for the younger ones this is a minority. Here also our suspicion is that older but still high-ranked apps can afford to absorb whatever negative impact IAP might have; developers of younger apps might be more concerned about building long-term market share and don’t want to jeopardize their success by adding ‘pay extra’ features,” explained Hartman. 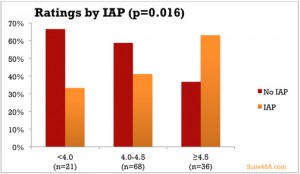 “No matter the longevity of the app or its ratings, fine-tuning IAP options to maximize monetization while minimizing any negative impact on user ratings and download number is not an easy feat,” concluded Hartman. “It requires creative experimentation as well as ongoing rigorous testing, as user expectations and competitive offerings continue to evolve.” suite48a.com