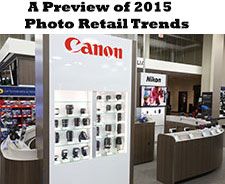 Time to dust off the crystal ball for a look ahead into 2015. The tumultuous year of 2014 is barely in the rearview mirror and 2015 is roaring in fast. What to expect?

Well, that rearview mirror could just as easily be a camera, considering how pervasive cameras have become in our daily lives. And that’s something photo retailers are adapting to. Cameras come in far more shapes and sizes than simply compacts and DSLRs. Set aside preconceptions: cameras are now wearable, drone-able, submersible, floatable and spherical.

It wasn’t too long ago when cameras were discussed in terms of “households”; that is, those households that even possessed a functioning film camera. At best, penetration was shy of 90% of U.S. households; that was the addressable market. That’s one reason why one-time-use cameras were so successful. More family members, including kids, could take great pictures easily, without the expense of buying a camera for everyone.

Later, as digital cameras became more and more popular, old models were handed down to other family members. Now, smartphones pack capable digital cameras in every purse or pocket.

In fact, one of the challenges a photo retailer must face is communicating to customers that their store is the destination for the next generation of picture-taking devices. Are drones and action cams getting the same attention as traditional DSLRs in the product mix? Given the accessory sales opportunities offered by drones and by action cameras, perhaps this is an area to revaluate.

Many photo specialty retailers have relied on co-op advertising for hardware items, which does wonders for the sponsoring vendors brand, but maybe not so much for the retailer. Crafting this message means putting the retailer first. This is a difficult choice for any retailer, especially since determining the ROI of marketing expenses is difficult. We’ll talk more later about the changing branding landscape; for now just remember, keeping the retailer’s brand in the forefront is the most important thing, not who pays for the co-op ads.

Keeping It All Straight
With more than a trillion images being captured each year, it’s become increasingly troublesome for consumers to manage the deluge of photos on their smartphones. Some apps, like Snapchat, treat the images as the trivial, ephemeral moments they are, and throw them away. On the other hand, image-enhancement apps are growing in popularity for smartphones and tablets, bringing the full-featured editing suites to a screen fitting into the palm of a hand. As everyday consumers do more with images, they are making images more meaningful to them. That means printing. But to print them, the consumer first has to find them!

As usual, though, as soon as a problem presents itself, solutions emerge. While image-management software has been around as long as, well, digital images, the recent introduction of fast, seamless cloud photo and data syncing services has created easy solutions to this problem.

Start-ups like Mylio take a cross-platform approach, making all your images available across devices. Eyefi’s new app/cloud service combo does the same. Other services, like Shutterfly’s ThisLife and Forever.com, want to be the online archive of families’ digital history. Cloud storage services, like Google Drive, Box.net and Dropbox, take the shoebox approach. Whatever the tactic, what’s important is never losing an important image and always having it accessible for sharing and printing purposes.

Just storing images isn’t enough; interoperability between services is becoming more and more important. Just like the old color negative, which could be printed at any one-hour lab no matter who developed it, a digital image on services like Google Plus, Facebook, Instagram and more can now be accessed by apps, by kiosks and by websites. This is a vital step to making photo product printing services even more convenient.

Let’s Get Small
Retail floor space is becoming more and more important to photo retailers who are facing an ever-changing photo retail landscape. Modern technology has reinvented what it means to be a retailer. Mobile payment technology, like Square, has made conventional POS systems less necessary, especially in high-service environments where sales staff roam the floor.

Some retailers still look like an old-style general store, with a long counter running along a wall with coveted products displayed behind the counter. This creates a barrier between the customer and the product, and many Millennials find this off-putting. Consumers are now doing a lot of research online, and they come into stores ready to have their questions answered and, hopefully, to buy. They want to handle the product before buying. Opening up the retail space is important to encouraging customer interaction.

This trend is exemplified by the “pop-up” store, where seasonal retailers set up shop in vacant areas of a mall or shopping center. Why can’t photo pick up on this trend? For example, Polaroid is taking the Fotobar to a new level, bringing out seven micro stores in Westfield mall locations in Los Angeles, San Francisco, Sacramento and San Jose, California. These 300-square-foot stores provide a limited product selection, especially compared to the flagship Fotobar superstore in Las Vegas. But they still provide enough of the printing “experience” to introduce shoppers to the joy of photo printing.

Another way for mass merchandisers to deal with this is to subdivide their floor space with themed areas, structured around product categories or brands. Best Buy recently upgraded 43 Chicago-area stores to feature Microsoft Windows Stores, Apple Shops, new Camera Experience Shops and a Dyson in-store experience. That’s on top of the Samsung Experience stores already found inside Best Buy stores. It’s like a mall-within-a-store-within-a-mall.

It’s too early to gauge the success of this experiment, but this type of micro store is part of an overall retail trend. Pop-up stores and open kiosks are among the fastest growing retail concepts; that’s one way to combat high mall occupancy rates!

What’s in a Brand?
Just like retail space, the meaning of a “brand” has changed. Brands were established in early catalog marketing to ensure products were of good quality and dependable. Later, in the age of “Mad Men,” brands were used to convey social status. This practice helped sell everything from Kodak Carousels to Cadillacs and Kellogg’s Corn Flakes.

Today, the function of a brand is not necessarily to convey these conventional ideas of quality or status. Look at the world’s biggest brands, like McDonald’s, whose tagline is “I’m Lovin’ It.” This has nothing to do with hamburgers, shakes and fries. Instead, the brand is about an emotional connection and relationship.

As such, some savvy photo retailers are adding online photo printing businesses to appeal to customer segments who don’t patronize their brick-and-mortar stores. This tactic may appeal to local geography, a different customer base and/or product set, like gifts. This maximizes in-house production while keeping the brand message consistent across customer groups.

The Rental Economy
Thank Uber for this one. If your customer base contains Millennials, it’s time to rethink your rental department strategy. Does it make more sense to sell them gear or to rent it to them? Photo dealers have been renting gear to pros for years, but now Millennials could be an emerging market. The whole idea of “owning” a product is not important to Millennials, who are not loyal to brands. They have grown up “renting” their smartphones, have given up car ownership for rideshare services and plan their vacations by renting apartments on Airbnb.

Something to think about, as you plan your 2015 business strategies.