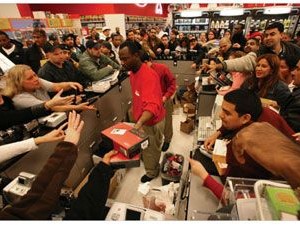 Woodbury, NY—The shopping season got off to its strongest start in years when consumers spent $11.4 billion on Black Friday, November 25, up 7% over last year, according to ShopperTrak, a Chicago based research firm. It was the largest amount ever spent on that day and the largest year-over-year increase since 2007.

In addition, consumer electronics, with digital cameras leading the charge, were among the most purchased items over the Thanksgiving weekend, with nearly half of all shoppers buying technology, according to the Black Friday Weekend survey by the Consumer Electronics Association (CEA) and Caravan.

Online shopping again showed strong gains, with a 24.3% percent increase in online spending on Black Friday, noted ShopperTrak. Overall results beat expectations of many retail experts who projected a smaller year-over-year increase due to the unstable economy. But door-buster sales, combined with early hour openings from some major retailers seemed to brighten the mood of shoppers looking for bargains.

Bill Martin, founder of ShopperTrak, said he was surprised by the strong showing but added that consumers across the country responded to a wave of strong promotions, some offering upward of 70% off regular pricing. “I’m pleased to see it. You can’t have a great season without having a good Black Friday,” Martin said in an interview with the Associated Press.

Sales were also up 4% in each of the two weeks leading up to Black Friday, as retailers continue to begin their promotions earlier to create momentum leading into the holiday season. And ShopperTrak (shoppertrak.com) is expecting sales to be up 3.3% this holiday season.

According to the CEA, consumer electronics trailed only clothes as the most popular gifts purchased over the Black Friday weekend. Consistent with CEA’s earlier holiday forecast, the Black Friday Weekend survey showed the most popular electronics purchased/planned to purchase were:
• Digital cameras
• Video game consoles
• Accessories (such as cables and cases)
• Televisions
• Notebook/laptop computers
• Smartphones
• MP3 players
• e-Readers
• Tablet computers

“Electronics continue to be the must-have gifts of the holiday as consumers are allocating more of their overall gift budget to buy the latest, innovative technologies,” said Shawn DuBravac, CEA’s chief economist and director of research. “Mature product categories, such as televisions, digital cameras and MP3 players, fared well this weekend as unprecedented price points proved too tempting for shoppers to ignore.” ce.org