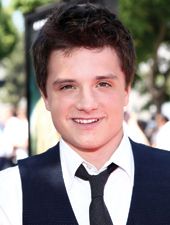 The user-generated experiment invites consumers of all skill levels to create and submit trailers of their everyday life. One winning trailer will be selected by Ron Howard and Josh Hutcherson, which will ultimately inspire a short film in which Hutcherson will star and produce. This marks Howard’s third time partnering with Canon, a brand that aligns with his conviction that people’s everyday lives are visually and cinematically worth recording.

“Josh Hutcherson is going to be a great addition, empowering a whole new generation to pick up a camera and realize they are far more creative than they give themselves credit for in their everyday life moments,” said Howard. “I encourage people to really have fun with their storytelling; who knows, the kid’s birthday party might end up looking like a horror film or a trailer for a fantastic thriller that could truly captivate us.”

“I’m fascinated by filmmaking and recently sat down with Ron Howard to hear about the history of Project Imagination,” added Hutcherson. “The creative process truly excites me, as does officially joining the cast of Canon’s Project Imagination: The Trailer. I’m really looking forward to starring in a film inspired by user-generated trailer submissions.”

At imagination.usa.canon.com, consumers can get inspired by watching “The Trailer of Your Life,” a 45-second trailer about the project that leverages everyday footage from consumers. The site also includes Ron Howard’s tips for creating trailers.

In 2012, Howard and Canon teamed up for Project Imaginat10n, the first photo contest to inspire a film festival. Project Imaginat10n resulted in the production of 10 films, five of which were consumer directed and five that were directed by influential celebrities from diverse backgrounds, Jamie Foxx, entertainer; Eva Longoria, actress; Georgina Chapman, cofounder of Marchesa, fashion; James Murphy, formerly of LCD SoundSystem; and Biz Stone, cofounder of Twitter, technology. The collective project was inspired by 91 winning photographs, one from each of 10 core tenets of storytelling. The 91st photo from the tenth theme, Discovery, was selected by Howard and woven into all films to create a common thread.

Grey New York, Canon’s agency partner, is developing the creative and digital elements of Project Imagination: The Trailer. Grey Activation & PR is managing the partnerships with Ron Howard and Josh Hutcherson, as well as the promotional, event and public relations efforts. usa.canon.com