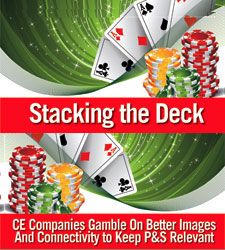 Not long ago, smartphones were a minor nuisance nibbling at the edges of the digital imaging ecosystem.  Now they’ve morphed into a major menace that has gobbled up the lower tier of the camera market and seems hungry for more. Recent interviews with executives at Panasonic, Sony and Samsung suggest that the ever-adaptable camera industry has settled on a two-track strategy for coping with the smartphone surge.

Rather than contesting the low ground, the industry is migrating toward higher levels of performance and functionality, emphasizing the inherent picture-taking advantages of cameras (such as long-zoom interchangeable lenses, larger sensors, better low-light capability and faster autofocus). Camera makers are also taking a page out of the smartphone playbook by incorporating Wi-Fi connectivity that allows users to instantly share images or download online apps.

The transition, challenging as it may be for the industry, could result in higher margins and smarter cameras that give us the best of both worlds.

“People are taking more pictures now than ever before, and that’s a positive,” said Stefan Guelpen, Panasonic’s vice president, Sales and Merchandising, Imaging & Communications. “But the smartphone has already overtaken the digital camera for general picture- and video-taking. Cameras are becoming more of a specialty, niche-type product for educated, enthusiastic consumers. It’s our responsibility to educate those who want better pictures about photography and the advantages of regular cameras.”

Panasonic sees its brightest opportunities in the middle of the market with mirrorless or compact system cameras (CSCs), a segment that is showing strong, double-digit growth while other categories stagnate or decline. Consumers are flocking to CSCs because they offer interchangeable lenses and DSLR-like performance in a smaller, more convenient form factor. Manufacturers like them because they offer higher margins and lock customers into a system of lenses and accessories.

Panasonic helped pioneer this segment just around the time that smartphones began eating away at the low end of the market. They now have a well-differentiated line of G-series mirrorless cameras ranging from entry-level to prosumer models. The flagship is the Lumix DMC-GH3, recently introduced at photokina.

According to Mark Goldstein of PhotographyBlog.com, “The Panasonic Lumix DMC-GH3 is the most complete mirrorless camera to date in terms of features, performance, customizability and image quality, and in terms of video capability it has a clear lead over both its compact system and DSLR rivals. At $1,299 body only, though, it is currently the most expensive mirrorless camera on the market.”

Compact cameras with long zooms are another area where Panasonic is already strong (12% share) and intends to concentrate resources. “The long-zoom business, 10x plus, has actually grown year over year, and we think it will hold steady until 2014,” said Guelpen. Panasonic’s latest ultrazoom is the Lumix DMC-FZ200, which features plenty of manual control, RAW capture and a 24x zoom at a fast f/2.8 across the entire focal range, good enough to win the Gold Award from DPREVIEW and Editor’s Choice from PC magazine. Retailing at almost $500, the FZ200 is hardly an entry-level camera. But Panasonic believes long-zoom capability will soon migrate down market and become a required feature of any camera that hopes to differentiate from smartphones.

Panasonic also plans to focus on “tough” cameras that feature shock- and water-resistant designs for people who want to capture good photos from outdoor adventurers. “We have a 10% share in tough cameras,” explained Guelpen. “It’s one of our strengths, an area where we can differentiate from smartphones, and we expect the business to hold steady for the next two years at least.”

Sony faces the same realities as Panasonic—a shrinking camera market, a double-digit decline in point-and-shoot sales and a strong Yen that places Japanese brands at a price disadvantage. But digital imaging is a core business for Sony, and they believe there are plenty of opportunities to raise ASP in the middle and higher ends of the market.

“Up until several years ago, the issue was: how do you get people interested in taking pictures,” said Kelly Davis, Sony’s vice president of Digital Imaging. “Smartphones have helped encourage customers to take more pictures than ever. Now our challenge is to convince customers to expect more from the pictures they take. If you use a smartphone for an important life moment, and the light is low, or there’s a lot of movement and you need fast focus, or you don’t have enough zoom, you’re going to be disappointed. That’s where we can differentiate.”

Sony ranks number one in compact system cameras and number three in conventional DSLRs, and they are making a strong push in those strategic segments.

“We see really aggressive growth year over year in CSCs,” said Davis. “We think this is the largest opportunity for us and the industry as a whole.”

Sony’s flagship offering in the mirrorless market is the NEX-6, which builds on the success of the NEX-7. Sony launched the NEX-6 at photokina 2012 and just started shipping it for around $999. Kelly contends that the NEX-6 offers the best of both worlds because it combines excellent image quality and Wi-Fi connectivity in a small package that includes full manual control and interchangeable lenses. One of the most innovative features of the NEX-6 is the ability to download specialized photo apps from the Internet.

“This is common for smartphones but a new thing for cameras,” said Davis. “We feel it adds unique value because it lets each consumer customize and personalize the NEX-6 by adding software apps that suit their own picture-taking style.”

Sony is also making a major push in the high end by showing a trilogy of full-frame cameras that debuted at photokina. “The full-frame market makes up a large part of the dollars for the DSLR industry and is growing in double digits,” said Davis. “Sony is going to address full frame across our multiple categories; if a customer wants a smaller full-frame camera with a fixed lens and extreme manual control, they can go with our RX1. If a customer who shoots video wants a full-frame camcorder that can change lenses, they can go with our VG900; for those who want a more traditional full-frame DSLR, we’ve released the A99. Full frame is a strategy that spans our video and still camera lines.”

Since all these cameras retail at well above $2,500, full frame is also a strategy that significantly increases Sony’s ASP.

While most of the imaging industry sees a high-stakes duel between cameras and cell phones, Samsung sees a duet, a win-win scenario. As a world leader in wireless and an emerging power in cameras, Samsung is ideally positioned to create consumer-friendly synergies between the two industries and to reap profits whichever way the pendulum swings.

“With the introduction of our 2012 Smart camera lineup, we are seeing a steady increase in sales and market share,” said Reid Sullivan, senior vice president, Mobile Entertainment at Samsung. “We expect to end the year with a significant increase in sales year over year, which is outperforming the market.”

The Smart cameras that Samsung introduced range from point and shoots to the award-winning NX series of compact system cameras. All are Wi-Fi enabled, allowing photographers to instantly share and back up both images and video. With the touch of a single button, Smart camera users can send images to social networks such as Facebook or e-mail them to family and friends. They can also share images between devices, such as Samsung smartphones, tablets or TVs. To preserve space on memory cards and protect against loss, they can store images online using free cloud services.

Like other industry experts, Sullivan notes a split between snapshooters who are satisfied with smartphone images and more serious photographers who demand higher quality. But he believes there’s no longer any need to sacrifice quality for connectivity.

“Consumers understand that they need a better quality camera to get better images but connectivity is quickly becoming a baseline requirement,” he said. “Our NX models now offer unmatched performance in a compact and lightweight body. And now that they have built-in wireless capability, the consumer no longer has to trade off performance for connectivity.”

But the real game-changer in Samsung’s camera line is the Galaxy digital camera, which breaks new ground in combining cell phone connectivity with the specs of a full-featured, long-zoom compact. On the imaging side, the Galaxy offers a 16.1MP sensor, a 21x optical zoom, scene modes, slo-mo and Full HD video capture, and an impressive 4.8-inch touch display. On the connectivity side, it features 4G Wi-Fi, the Android Jelly Bean app and all sorts of Google goodies, including web browsing, books and movies.

Some reviewers are ecstatic.  Peter Pachal of Mashable.com writes: “The Samsung Galaxy camera is an incredible device. Samsung’s daring attempt to combine Android with a serious compact camera has created what could be the gadget of the year. Like great fusion cuisine, it takes advantage of the strengths of its two components to overcome their weaknesses. The result: delicious progress. Despite a few quirks (most of which can probably be fixed with software updates), I’m utterly enamored with the Samsung Galaxy camera.”

Other experts are more cautious, especially about cost, noting that in addition to the $499.99 (AT&T) suggested retail price for the camera, consumers must also pay monthly fees for online data services. But whatever reservations remain, Samsung’s Galaxy has certainly caused a ‘big bang’ in the market and suggests that the connectivity-versus-quality debate may not be a duel to the death but a mating ritual that leads to the birth of a new category—the full-featured, fully connected camera of the future.