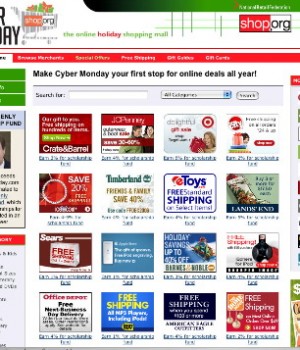 The controversy over whether or not Cyber Monday is indeed a new holiday shopping phenomenon appears to have been quieted as the National Retail Federation (NRF) recently reported that online shopping numbers for the Monday after Thanksgiving were reported as showing a 26% increase from last year and totaled a new single-day record in the e-commerce world totaling $608 million.

Sites such as Amazon.com (6.9 million unique visitors) and Walmart.com (4.8 million) led the way as online shoppers flexed their shopping fingers in search of deals they didn’t take advantage of on Black Friday.

The phenomenon now known as “Cyber Monday” actually began a few years ago as researchers began discovering sharp spikes in online shopping numbers on the Monday6 after Thanksgiving, attributing it to people returning to work after the holiday weekend to ramp up their Christmas shopping and perhaps those that missed out on Black Friday attempting to find bargains online.

Despite the gaudy numbers, most researchers anticipate Cyber Monday will be easily toppled as the number one online shopping day of the year. Internet research firm ComScore Networks Inc. expects Dec. 11 or Dec. 12 to easily surpass Cyber Monday’s numbers. Last year, the first Monday after Thanksgiving was actually only the ninth busiest online shopping day of the year.

Helping the day along were a multitude of online only special offers with consumer electronics retailer Circuit City offering special Web-only coupons just for Monday, including savings of $100 on TV purchases of $1,700 and up, as well as $50 savings on home audio systems purchases of $400 and up.

The NRF actually launched a site last week called CyberMonday.com, which pulled together online discounts for Cyber Monday and the rest of the holiday season from nearly 400 retailers around the country.

As for a final number attached to the 2006 holiday selling season, the NRF anticipates holiday sales will grow 5 percent to $457.4 billion this year, slower than last year’s 6.1 percent increase.