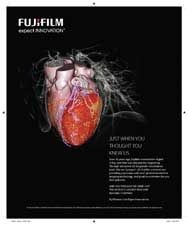 Valhalla, NY—In an effort to let consumers and business leaders in on diverse areas of Fujifilm’s business, Fujifilm Holdings America Corp. launched its first-ever brand advertising campaign. Under the banner “Fujifilm. expect INNOVATION,” the campaign will tell the Fujifilm brand story through its unexpected innovations, based on Fujifilm’s proprietary core technologies developed over the years.

For more than 78 years, Fujifilm has had a history of innovation in the photographic industry. During that time, the company employed its fundamental core technologies that are grounded in the development of high-quality photographic product, and it is now using them to create products and services for new businesses—some expected and some not so expected.

“In the last decade, Fujifilm made many changes and investments to diversify its business. Now the timing is right for Fujifilm to support those strategic business moves with an overarching brand message,” said Ray Hosoda, president, Fujifilm Holdings America Corp. “This new ad campaign illustrates how Fujifilm has extended it products and services into markets beyond the traditional film and imaging industries for which we are best known, such as digital cameras, and photo imaging and printing equipment.”

The new campaign includes print ads that begin with the words “Just when you thought you knew us” and features an unexpected product or technological development—all under the tagline Fujifilm. expect INNOVATION. The print ads will be placed in major national daily newspapers and will extend to other media.

The first ad, which began running March 18, features the 3D medical imaging product, Synapse, which is used to view clear, detailed 3D images of internal organs and is currently marketed in the U.S. by Fujifilm Medical Systems, USA. Over the next year, Fujifilm will develop additional ads that will target specific customer bases and markets, illustrating the different areas of extended business. fujifilmusa.com