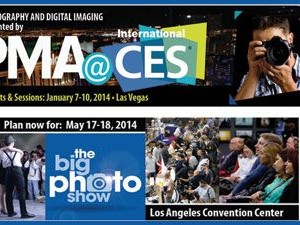 Jackson, MI—A new video featuring highlights from the 2013 PMA@CES Convention and 2013 PMA Conferences is now available for viewing on YouTube.

The video offers an inside look into the PMA education sessions, exhibits and networking events. Viewers can also sign up for early registration as well as view housing and travel prices for the 2014 PMA@CES events. The event will be held January 5–10, 2014.

“There was a lot of excitement at 2013 PMA@CES, as our new video demonstrates. We are looking very forward to 2014 PMA@CES and the 2014 PMA Conferences, which will provide the best opportunities for attendees to experience the most cutting-edge education and innovative product displays, as well as face-to-face interaction with other industry leaders,” said Allen Showalter, PMA president. “Both PMA@CES and the PMA Conferences are about growing the imaging industry. If you want to be a part of that growth, you need to be there.”

Also available on YouTube are videos showcasing interviews with exhibitors and event highlights from the 2013 Big Photo Show, which took place in Los Angeles May 4–5, 2013.

For information about exhibiting or sponsorship opportunities at the 2014 PMA@CES and 2014 PMA Conferences or the 2014 Big Photo Show in Los Angeles, May 17–18, 2014, contact Jeff Frazine at jfrazine@pmai.org.