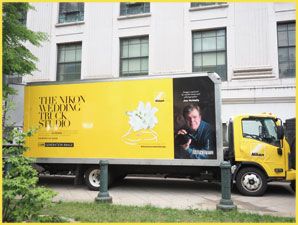 New York, NY—It’s not every day you’re walking in New York City and a photo studio in a truck pops up to capture wedding pictures of newly married couples emerging from the Office of the City Clerk in downtown Manhattan. Well, that’s exactly what happened on June 4, thanks to Nikon Ambassador Joe McNally, whose creativity seems to have no bounds.

The Nikon “Wedding Truck Studio” was parked in probably the most impossible parking spot to get in New York—right across from the Office of the City Clerk. As newlyweds emerged from the building, they were asked if they wanted to have free portraits taken by McNally.

“It’s one of those nutty ideas,” said McNally between photo setups. “A good friend asked me to photograph his wedding about a year and a half ago down here. I came down on a subway, shot a whole bunch of pictures and had a blast. Then I did a little research and learned that more than a hundred couples a day get married here on a busy day. So the studio in a truck idea was born.”

“Joe presented his idea to us, and it seemed logical and crazy at the same time, which we loved,” said Lisa Baxt, Nikon’s assistant general manager of Communications. “One of the things we know is that important moments in peoples’ lives lead to great stories, and who better to tell great stories than Joe McNally, a Nikon Ambassador and an amazing photographer.

“Capturing people in a serendipitous moment when they’re getting married is the ultimate story they can share,” Baxt added. “We were really excited about the idea, so we went for it. It was also a perfect fit for our I Am Generation Image campaign. So we worked collaboratively with his team and made it work.”

Newlyweds and their families patiently waited their turn as McNally not only photographed the couples but their families as well, with a lighting setup facing the back of the truck and a black curtain draped inside. There was also a compartment inside the truck for shooting portraits. After the shoots, which each took around 15 minutes, the couples were asked if they wanted to talk about their experience on video, and many of them did.

“There are several ways of telling a story—among them, one is visual and another is verbal,” said Mike Corrado, who runs Nikon’s Ambassador program. “When you put them together, it just completes the experience. And it’s something Nikon can do better than anyone else. It’s our culture. We don’t just sell boxes, we’re teaching people how to tell stories.”

So what about that parking spot?

“It took our producers the better part of 1,000 e-mails to get this done,” said McNally. “I’m sure it might have been easier in Topeka, Kansas. But it was well worth the effort to see the smiles on those beautiful couples’ faces.”

I asked McNally if he was ready to take the Nikon Wedding Truck Studio on the road. “Who knows where it might go from here,” he answered.

Of course, the real winners were the happy couples who came away with beautiful wedding portraits from McNally—and a story they can one day tell their kids about the Nikon Wedding Truck Studio that happened to pop up in downtown Manhattan on the day they were married. nikonusa.com