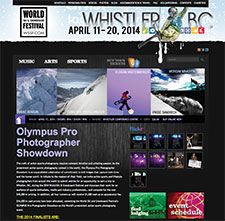 On the line for the competitors is a shot at the $10,000 grand prize for Best in Show and an opportunity to showcase their life’s work to a live audience of more than 1,500 sports enthusiasts, media and industry professionals.

Each photographer will submit a nine-minute slideshow compiled of images selected from their portfolio. The slideshow themes are open to interpretation and can include anything from ski and snowboard photography to surfing, biking, skateboarding and lifestyle. The slideshows will be presented on April 17 at the Whistler Conference Centre, where a panel of industry experts will determine the winner.

The finalists for the 2014 Olympus Pro Photographer Showdown include the following.

Brent Benson. Based in Salt Lake City, Utah, Benson began skiing at age two. In 1998, he decided to take his passion for the sport in another direction, and thus his love affair with photography began. Benson’s inspiration was to get away from the “poser” powder shots and show people what was really happening in the world of skiing. In 1999, he introduced the legendary Chad’s Gap in Utah to the world in a two-page spread in Powder magazine, and his photos continue to grace ski and snowboard publications worldwide.

Christoph Oberschneider. Oberschneider studied at the Medical University in Graz, Austria, but he couldn’t shake his passion for skiing and sports photography. Now 30 years old, he is looking to find a career that combines his love for nature, skiing, photography and general medicine. In 2012, he presented his movie, Days of Powder in Sportgastein, at the Salzburg Bergfilmfestival, and in 2013 he placed first in the amateur photographer category of an online contest held by Backline magazine. His work tries to showcase the emotions that occur during free riding while illustrating the mountain’s natural beauty and communicating the pleasure felt by the athlete.

Florian Breitenberger. Growing up just south of Munich, Breitenberger was strongly influenced by the Alps. He first picked up a camera three years ago, and capturing the culture of the mountains quickly turned into his passion. He is now working toward a degree in Management and Economics while continuing to pursue action sports photography. He is the German Salomon Freeski team photographer, and in 2013 his work earned him the iF3 Photographer of the Year and ISPO awards.

Frode Sandbech. In 1994, Sandbech bought an old Pentax camera, and he sold his first image in 2001. His international breakthrough came in 2004 when he landed the cover of the TransWorld SNOWboarding Photo Annual. Since then he has traveled with top athletes, has held international photo campaigns for various companies and has secured more than 50 magazine covers. Frode attempts to balance creativity with clean geographical lines and likes to find simple compositions that highlight the rider, tell a story and “make the viewer dream.”

Morgan Maassen. An American photographer based in Los Angeles, California, after graduating high school early, Maassen concentrated on his passion for film and photography. The majority of his work is influenced by the water, as seen by his collections of surf and water photography. wssf.com/event/olympus-pro-photographer-showdown