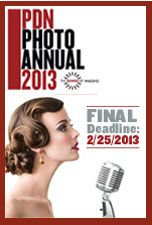 New York, NY—Due to demand, Photo District News is extending the submission deadline for the PDN 2013 Photo Annual photo contest, with more than $30,000 in cash and prizes up for grabs. The final deadline is February 25, 2013.

All entries will be reviewed by top photo industry judges, and winning images will be published in the June issue of PDN— the Photo Annual issue. PDN is also hosting an exclusive party in New York City to honor the winners, with judges, industry creatives and photographers among the invited guests.

The $15,000 Arnold Newman prize for New Directions in Photographic Portraiture will be awarded to a winner of the PDN Photo Annual contest whose work echoes Arnold Newman’s legendary portraiture. The award is funded by The Arnold and Augusta Newman Foundation with support from the Maine Media Workshops, American Society of Media Photographers and PDN.

Additionally, for the past nine years, PDN has teamed up with Parsons The New School of Design to award students and emerging professionals the Marty Forscher Fellowship Fund for outstanding achievements in humanistic photography. One professional and one student winner will receive a cash award.

Furthermore, the Epson Creativity Award will be presented to a photographer who demonstrates originality and creativity in his or her approach to black-and-white photography. One winner will be selected to receive a cash scholarship of $1,000.

New this year is the PDN Publisher’s Choice Award; one winner will be featured in a full-page, self-promotion ad in an upcoming issue of PDN, mentioned in the Publisher’s Letter and receive a $1,500 cash award.