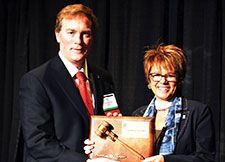 Las Vegas, NV—In a history-making vote, PMA elected Gabrielle Mullinax, the owner of Fullerton Photographics in Fullerton, California, as president for 2015–2016. This is the first time in its 91-year history that PMA will have a female president. The news followed an earlier announcement that respected imaging industry veteran Georgia McCabe was appointed by PMA’s board of directors to serve as the association’s first female CEO and executive director.

Fifteen years ago, as an entrepreneurial photographer and young mother, Mullinax bought a minilab and joined the ranks of the photo industry. At the cusp of the digital revolution, Fullerton Photographics was an analog film-processing lab without even a computer on-site. With a degree in marketing and an inherent understanding of her target market—women like herself—Mullinax devised creative, unique promotional campaigns and new product innovations. Her strategies redefined Fullerton Photo and made it one of the most successful specialty photo stores in the United States today.

Not only did she spur remarkable growth in her own business, but Mullinax also inspired the transformation of the photo retail world in general. She continues to urge retailers to accept the concept of the photo design center to help consumers discover the unlimited creative output possibilities for their images.

As a leader at PMA and a speaker for imaging industry organizations such as IPI and PRO, Mullinax generously shares her ideas with others, many of whom have adopted them and achieved similar success.

“Gaby is taking over leadership of PMA at the perfect moment, as we are committing to revitalizing PMA just like she revitalized her business,” said outgoing PMA president Bill Eklund, of Sharp Photo in Eau Claire, Wisconsin. “She is the right person at the right time. I can’t think of a more qualified leader for the job.”

In her acceptance speech, Mullinax noted, “We are taking a fresh look at the possibilities. We are envisioning what PMA would be if it was a brand new organization, coming into existence now for the first time. We are using that picture to restructure, to build something new that serves the current and evolving needs of our members today, and of our future members.

“This is your PMA, and we invite you to join with us in reinventing it. As a unified industry, we will be a powerful force for change, growth and development,” she continued. “Together, we can help consumers realize and embrace the fact that pictures matter. We can do this because we believe in photos. We believe in this industry. We believe in PMA.”

Mullinax, who is also a columnist for Digital Imaging Reporter magazine received this year’s PMDA Visionary Award on January 5, 2015 at a gala event held in Las Vegas prior to the International CES. pmai.org