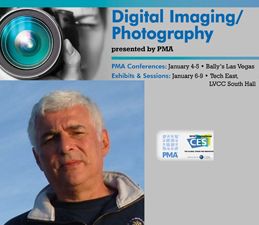 Jackson, MI—PMA announced that well-known photo market and digital imaging consultant Scott Brownstein, of Brownstein & McCabe, will be the featured Official Business Session speaker at the PMA 2015 Conferences on January 6, 2015. The event will be held at Bally’s Las Vegas, just prior to the Digital Imaging/Photography Conference and Marketplace, presented by PMA, at the 2015 International CES in the South Hall of the Las Vegas Convention Center.

Brownstein, who holds more than 20 patents, spent 23 years at Kodak, where he developed many advanced digital products, including dye-sublimation printing, Create-a-Print consumer-operated kiosks and the Kodak PhotoCD system. In addition, he was the founder and chief technology officer of Fujifilm e-Systems and was also the creative force behind one-hour web-to-retail printing at more than 1,000 Ritz Camera stores and more than 3,500 Walmart and Sam’s Club locations. Among many other accomplishments, Brownstein was the founding president of the Digital Imaging Marketing Association.

During his session, called “What’s the Problem?,” Brownstein will provide insights to the challenges facing the imaging industry today, and he’ll offer his unique perspective on moving forward into a bright future. “What are our industry’s best ideas for enhancing customers’ digital imaging journeys? Where do the solutions lie?” Brownstein will tackle these tough questions and others, and present his take on how we can ensure the photo industry will remain an evolving sector with significant opportunities.

As previously announced, author Colby B. Jubenville, PhD, and imaging industry/retailing expert Bill McCurry will be the sharing the stage at the other PMA 2015 Conferences Official Business Session, being held January 5 at Bally’s. pmai.org