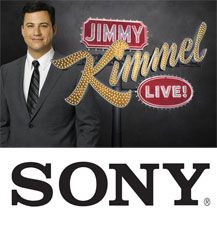 San Diego, CA—Sony Electronics launched a yearlong relationship as the official concert series partner of the ABC late-night hit, Jimmy Kimmel Live, which airs at 11:35 p.m./10:35 p.m. CT. Jimmy Kimmel serves as host and executive producer of the Emmy Award-nominated talk show that is now in its tenth season. The deal begins on March 19 with T.I. as the first performer on JKL’s Sony Studio Stage in Hollywood, California.

Representing a blend of music and technology, the new partnership creates a custom platform for Sony Electronics and its sister divisions, including Sony Music Entertainment and Sony Pictures Entertainment.

“Teaming up with Jimmy Kimmel Live reinforces Sony’s vision for synergy among consumers of entertainment and technology, and demonstrates Sony’s desire to reach those consumers through more engaging, custom platforms,” said Phil Molyneux, president and COO of Sony Electronics. “Sony is the only company that can take consumers from the lens, the studio, and the set to the living room for the ultimate entertainment experience.”

Sony is powering both the Jimmy Kimmel Live broadcast and concert series with its products. As part of the sponsorship, Sony digital imaging products will be provided to 10 T.I. concertgoers attending the performance on the outdoor Sony Stage. These fans will use the devices to film the concert from the crowd, creating the first crowd-sourced coverage of a Jimmy Kimmel Live performance. The event will live on the newly launched Jimmy Kimmel Live Music YouTube Channel.

Throughout the relationship, Sony will also showcase new products on the Jimmy Kimmel Live show with multiple custom integrations. Sony products and technology will be integrated into the brand-new indoor and outdoor Sony Stages, which will house a total of 146 concerts during the relationship. Sony will also enhance the Jimmy Kimmel Live studio with the latest in innovations and trick out the greenroom with premium consumer electronics.

The deal is perfectly timed to coincide with Jimmy Kimmel Live’s recent ascendance in the 11:35 p.m. time slot, which has led to its highest ratings to date. Doug DeLuca, Jimmy Kimmel Live’s co-executive producer stated, “Jimmy Kimmel Live is dedicated to producing the best content possible. Be it comedy or music, we focus on creating a spectacular viewing experience for our audience on all platforms. Sony is best in breed when it comes to tools for content creation so it is a natural for us to join forces.” sony.com