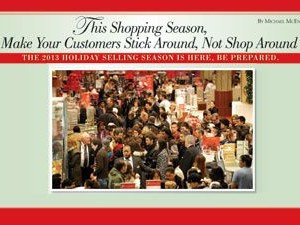 At the risk of taking the nuts out of the fruitcake, I’m going to throw a scary 2013 holiday shopping statistic at you before you reach the second paragraph of this column. The 2013 calendar has six fewer shopping days between Thanksgiving and Christmas.

That’s almost a full week less of shopping days during that extremely critical period for retailers. Hope that sunk in immediately, as this will undoubtedly make this key period even more insanely intense than last year.

Add to this the fact that Hanukkah begins weeks earlier than last year, actually kicking off before Thanksgiving. Simply stated, if you’re not already fully engaged, locked and loaded for this year’s holiday selling season, you’re going to regret your hesitation.

According to a recently released survey from ShopperTrak, in-store retail traffic is expected to drop 1.4% this year during November and December (compared to a 2.5% increase last year). The reason for this is that consumers are expected to do more research purchasing online during this period before going to make the purchase.

Refik added that retailers need to maximize both their online offerings as well as their in-store opportunities based on this research.

“It will be important to use the web and your mobile marketing efforts to get them to come in,” she said. “And once in-store, you’ll need to open up exactly who you are to them. Show them why your place is the right stop, and particularly for imaging retailers, why they’ll need to come back after the holidays as well.”

Something Different
Here’s another point that plays nicely into the imaging retailer’s hands: sales are very much up for grabs during the early part of the holiday shopping period. According to a recent Google consumer study, in 2012, over 25% of holiday shoppers purchased from a retailer they had never shopped at before.

When you look at this fact more closely it begins to come into clearer focus, as during this time of year many consumers are often looking for things they don’t typically buy. This should play directly into your wheelhouse if you’re an imaging retailer.

You should be making major efforts now to sway these undecided shoppers looking for something different, while at the same time reinforcing your unique in-store services and retail brand with your existing loyalists as well.

Also worth noting is that in this day and age when consumers can’t wait to flock to social media to crow about the things they buy, happy first-time buyers can become tremendous supporters and evangelists for your store.

In fact, that aforementioned Google survey also found that first-time customers who become loyal customers tell their friends about a brand more than a third of the time, and more than half the time they’ll make a repeat purchase.

Facing economic facts isn’t always a fun process today, but although the economy continues to recover slowly, consumers remain cautious about spending and are not exactly ready to splurge. It’s more important than ever that retailers stress value as well as something Refik feels imaging retailers have over all others.

“Consumers need to feel like they’ve purchased something special, especially this time of year,” she added. “When you’ve done that, the product and the visit stand out long after the decorations are taken down and the New Year’s celebrations are over. When you do this, you haven’t simply made a sale, you’ve gained a regular customer.”

All right, so let’s end by getting the nuts back in that fruitcake. Make sure these next few months count by seeing to it your unique services are front and center in your marketing efforts and that outstanding customer service remains king.

Early Retail Gift from Fujifilm?
Interesting news from Fujifilm recently, which perhaps can be looked at as an early holiday gift for retailers. The company announced the new Frontier-S DX100, a more compact version of earlier Frontier models. Fujifilm tells us the Frontier-S DX100 is a multipurpose inkjet printer that provides photo retailers and event photographers with “a scalable system that supports their various printing services, installation space and budget.”

The company adds that the new machine was developed with flexibility in mind, to combine the benefits of a dye-sublimation printer size, portability and ease of use with the vivid but accurate color reproduction and deep blacks of an inkjet printer. It sells for $3,495.