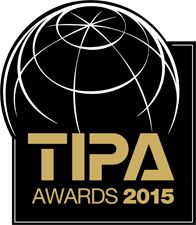 Madrid, Spain—The Technical Image Press Association (TIPA) celebrated the XXV edition of the TIPA Awards during a ceremony on June 19, 2015 in Tokyo, Japan, at the Westin Hotel. Representatives of the winning companies were welcomed by members the TIPA board.

TIPA member magazines and the Camera Journal Press Club (CJPC) of Japan had selected the best photo-imaging products launched in the last 12 months, in 40 categories, at the annual meeting of TIPA on March 20, 2015 in Dubai. At the Tokyo ceremony, the bronze trophies, based on the TIPA logo, were presented for the 40 winning photo-imaging products.

During his speech, the TIPA chairman, Thomas Gerwers, pointed out: “To correctly expose a photograph, you have to find a balance between a diaphragm aperture and exposure time. In 2015, TIPA continues to evolve by finding the delicate balance between new contemporary practices and a photographic culture, both technical and aesthetic, which is based on TIPA’s 25 years of experience. Because the photograph was not born with the smartphone and selfie, TIPA draws on its history to understand the present and look to the future beyond the fleeting influences of fashion.”

For a complete list of winning products, visit: tipa.com/english/XXV_tipa_awards_2015.html.

TIPA was founded in Paris in April 1991 as an association of European photo and imaging magazines. At the annual meeting in 2009, TIPA members voted to transform the association into a global organization. TIPA decided that the time had come to grow and strengthen its image and influence at an international level. The association now has member magazines from eight European countries plus Australia, Brazil, Canada, China, India, South Africa and the USA. The CJPC of Japan and TIPA cooperate to vote for the best products for the TIPA awards and the Japanese Camera Grand Prix. tipa.com