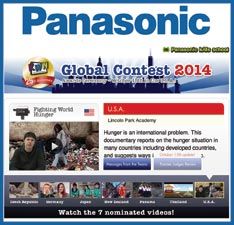 Newark, NJ—Panasonic Corporation announced the finalists of its 2014 Kid Witness News (KWN) global contest, a video education program that empowers kids to make short videos about places, topics and people important to them.

The winner of the 2014 KWN global contest will be announced October 15 at the 25th Annual KWN Global Awards Ceremony at Panasonic Corporation of North America headquarters in Newark.

“For 25 years, Panasonic has played a role in empowering kids to explore the world around them with the Kid Witness News program,” said Marilyn “Penny” Joseph, Panasonic Corporation of North America’s vice president of Community Relations and Corporate Outreach. “Now, with video technology more advanced and versatile than ever, thousands of KWN kids are telling stories in ways we could never have imagined just a few years ago.” Panasonic is searching for KWN alumni to share their stories and inspire a new generation.

KWN provides video cameras, sound gear, editing tools and other equipment to more than 10,000 school children and teachers participating in the program. Marking its 25th anniversary this year, KWN’s global contest saw entrants from 548 schools across 23 countries submit videos on topics that included ecology and communication.

The seven grand prix finalists are:
· “Fighting World Hunger” (USA). This documentary reports on hunger in many countries, including developed nations. It also proposes ways to help people through support associations.
· “Kamil and Me” (Czech Republic). This entry focuses on the deep friendship that develops after a pool accident when Kamil, a boy with disabilities, saved another boy.
· “Stumbling” (Germany). The documentary looks into the history of the “stumbling blocks” that were placed in the streets with the names of Holocaust victims engraved on them. The film tries to understand the victims’ stories through the expression of theater.
· “There Was Once War Here” (Japan). To spread awareness and a message of peace, the students in this documentary interview those with knowledge of the “balloon bombs” Japan used to attack America during WW II.
· “Searching for Summer” (New Zealand). Sixteen-year-old Summer was raised under the care of foster parents, and this film follows her journey to find out who she is and meet her real mother.
· “I Can” (Panama). This documentary sends kids the hopeful message that even though life has its difficulties, with effort dreams can come true. It shows them how they can gain inspiration from adults they look up to.
· “Value of Immensely” (Thailand). Documenting a young boy who was brought up in a village where pigs and the smell of pig manure was a problem, the film shows how collaborating with a local university, the village was able to produce natural gas from the manure and solve the odor problem while helping the village develop.

To watch the Kid Witness News videos made by this year’s finalists, visit panasonic.net/kwn/contest2014.

Designed to foster creativity and presentation skills among young students, KWN got its start in 1989 in the U.S. as a hands-on video education program supported by Panasonic North America. The company supplied video cameras and editing equipment to public elementary and middle schools to make news programs from the perspective of children. The program was expanded globally, and at present, 548 schools from 23 countries and regions are participants. panasonic.com