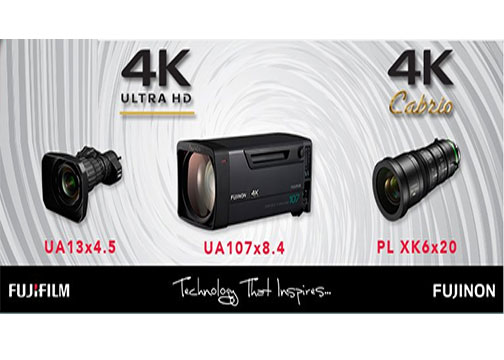 Wayne, NJ—The Optical Devices Division of Fujifilm appointed Tom Fletcher as director of Sales. In his new role, Fletcher will oversee sales and promotion of broadcast and cinema lenses in North America.

He will work under the guidance of the division’s vice president, Gordon Tubbs. Fletcher will lead the sales efforts of six regional managers in North America. Fletcher’s position is effective immediately.

Fletcher brings a wealth of varied cinema and video industry expertise to his position. He is best known as the vice president of Sales & Marketing of Fletcher Camera & Lenses and for his popular camera and lens comparison charts. He has extensive background in both cinematography and broadcast production technology and their use in real-world applications.

“Our industry is rapidly changing with the introduction of 4K broadcasting and the continued growth of digital cinematography,” said Tubbs.

“As we continue to expand our Cine-style line and enjoy a dynamic transition from HD to 4K and HDR, we believe Tom’s a perfect fit for the Fujifilm team. His expertise in ENG is also deep. While at Fletcher Chicago, Tom and his staff worked with local and network news operations as well as freelance crews across the country. He really knows what our entire range of customers is looking for in optics. I’m confident his experience and drive will help us meet and exceed our goals.”

He has also been an active consultant with the Optical Devices Division of Fujifilm since last May. At that time, he began organizing the marketing and development efforts of Fujinon Day events across the country.

In addition, Fletcher sits on the boards of the Association of Independent Commercial Producers (AICP/Midwest) and Production Equipment Rental Group (PERG). He is an active member of both ASC’s Awards Committee and the Lens Technology sub-committee. In the past, he was on the boards of the Midwest Independent Film Festival, Michigan Film First, and the International Electronic Cinema Festival. Furthermore, he served as president of ITVA-Chicago.

“This position highlights all the sales and marketing work I’ve been doing as a consultant and what I did with Fletcher Camera for the broadcast and cine customers,” said Fletcher. “I feel like this is a perfect fit. I’m thrilled to be a part of a team so committed to quality optics and to serving its customers. I’ll get to see and work with all the folks I’ve grown to know so well over the years while meeting new producers, DPs and production managers.”

Fletcher will work from his Lake Forest, Illinois, office. He can be reached via e-mail at thomas.fletcher@fujifilm.com or by phone at (312) 882-1901. fujifilmusa.com