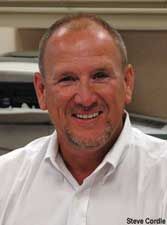 Columbus, OH—Steven L. Cordle, CEO of Cord Camera, died on Easter Sunday, April 8, 2012, when his courageous battle with cancer came to an end. Cordle, 58, had remained with the company as CEO after an ownership group purchased it out of receivership in 2009, but he wasn’t involved with daily operations recently as he underwent treatment.

Born on March 22, 1954 in Columbus, Ohio, Cordle began working at the family business, Cord Camera, from the time he was “old enough to see over the counters.” He worked side by side with his father, Cushman “Jick” Cordle who founded the business on April 2, 1954, his Uncle William “Bud” Cordle and grandmother Laura Cordle.

The business started out as Fast Photo Service, a wholesale black & white film processing company that later was incorporated as Cord Camera. In June 1954, the company expanded into retail photographic equipment and supplies, and continued the lab operation at a location near Ohio State University. The wholesale business was sold off in 1957, and Cord Camera began to open more stores around Columbus, Ohio.

When Steve Cordle graduated high school in 1972, he joined the company full time along with his brothers Bob and Dave. Then in the late 1980s, he became part owner of the corporation along with his father, Jick. When his father retired in 1995, Steve Cordle became sole owner to oversee the continued expansion of Cord Camera into new markets in Indiana, Cincinnati, Ohio, and northern Ohio. In 2006, Cord Camera earned honors as Photo Industry Reporter’s Photofinisher of the Year. However, with 18 locations, the company struggled through the recession. In the fall of 2009, Colfax Financial LLC bought Cord Camera Centers Inc. and the family remained part of the ownership group. On April 2, 2012, Cord Camera celebrated 58 years in business.

“I think the positive thing for the company is Steve had kind of removed himself from the day-to-day activity to spend more time with his family and address his health concerns,” said CFO John Crotty. “Because of that, we have a management group here that can take the company forward.”

Steve Cordle was very active in the industry, having served on the Photo Retailer and On-Site Lab National Advisory Committee from 1997–1999 and 2008–2009, and on the board of trustees for PMA from 2005 to 2007. In addition, he served on the board of directors for Photographic Research Organization (PRO) for many years.

Cordle, who also owned the Pine Lakes Golf Course in Mount Gilead, is survived by his wife, Michelle, and his four daughters—Stephanie (Mahan), Haley, Mya and Zoe—in addition to his parents, Jick and Jenny Cordle, and brother Dave Cordle. Steve Cordle was a loving father, husband, son and brother who will remain in the hearts of all who knew and loved him.