Melville, NY—Canon USA, in collaboration with HitRecord, premiered A Forest Haunt. The input from hundreds of people from various locations shaped the animated short film. Further, Edward Jesse and Toff Mazery directed the film and Joseph Gordon-Levitt is the narrator.

HitRecord runs an online community for creative collaboration; Jesse and Mazery are the creators of the AppleTV+ animated series Wolfboy and the Everything Factory.

Development of the short film began in January at CES 2022, inside Canon’s booth experience “The Writers’ Room.” While Hollywood writers’ rooms are typically limited to a handful of professional screenwriters, this one offered CES attendees and virtual participants the chance to collaborate in the filmmaking process. What’s more, the project was enabled through Canon’s AMLOS (Activate My Line of Sight) system in development.

Over the course of three days and 25 interactive brainstorming sessions, hundreds of participants shared their ideas for a theme and narrative as well as character development. Their collective story was developed into an animated short film by the HitRecord production team. 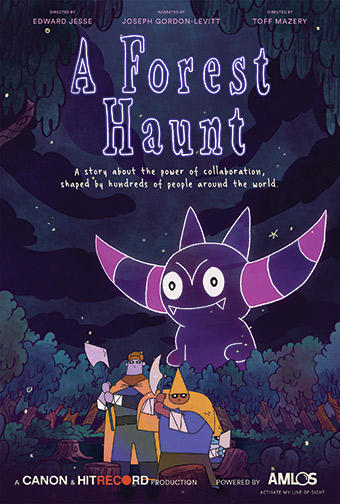 “It’s become a mission of mine to offer the experience of creating art to more people. So when we heard what Canon was doing with AMLOS, it felt like a great fit,” said actor, writer/producer, Joseph Gordon-Levitt. “The Writers’ Room was a bit of an experiment; we’re incredibly proud of this beautiful short film that came out of it. It shows how technology can be a great enabler for creativity.”

The project showed how the AMLOS solution can help enhance the creative process in today’s hybrid work environment, where people collaborate from anywhere.

“Working with Joseph and HitRecord on this project was an unforgettable experience. They are true masters of the collaborative process; watching them leverage our technology to create an animated short film was very exciting. We want to thank HitRecord and the many collaborators who participated in the process. We couldn’t have done this without them,” said Kohei Maeda, advisor, marketing, Business Information Communications Group, Canon USA, Inc.

“A Forest Haunt is a great example of how we imagine various industries utilizing the power of AMLOS. Canon is developing this solution with the goal of keeping colleagues and team members connected in hybrid working environments; in an effort to help alleviate some pain points that can come with working remotely in an interactive group setting,” added Maeda.

Development of A Forest Haunt

The Writers’ Room at CES was a collaborative meeting space utilizing a beta version of the AMLOS software. Canon provided the technical foundation for HitRecord’s creatives to interact with in-person as well as virtual CES participants.

The members of HitRecord present in the room leveraged the gesture controls of the AMLOS solution, as well as Canon’s 4K image capture tech. Consequently, they kept remote participants engaged during the white boarding of story ideas, themes and character development. For three days, the creative team led participants in a range of creative discussions, which shaped and informed the development of the animated short.

As a result, A Forest Haunt is an animated short film about the power of collaboration, which became the selected main theme. In the story, greedy woodsmen threaten to destroy a sacred forest. In order to save her home, one little haunt must confront the limits of her own might and learn to embrace the power of collaboration. The animated short film is now available for viewing across Canon and HitRecord social channels.

Moreover, AMLOS is a collaborative work solution to harness the power of Canon’s image processing technology. Its goal is to create an immersive hybrid work experience.

The software uses a single camera that enables multiple lines of sight. Furthermore, it is simple to operate, with in office users able to use intuitive gesture control for certain functions. It will also provide virtually seamless connectivity with others through Microsoft Teams and Azure.

Canon will make the AMLOS software available in third quarter 2022.