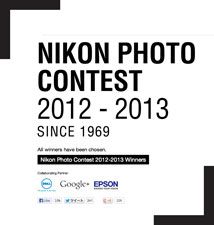 “Our judges loved this image,” said Chris Rainier, a member of the judges’ panel. “It tells so many stories. It is at once traditional and respecting of the elders set in a classic living room, yet whimsical with the reference to space travel. It points to our future while honoring our past. Indeed deserving of the grand prize.”

Nikon accepted entries in four categories during the period of December 1, 2012 through February 28, 2013: single photo; photo story (two to five images presenting a theme or idea); photographic video (45 seconds in length) ; and motion snapshot (a special category celebrating the new form of imaging expression made possible by a function built into Nikon 1 compact system cameras that combines still images with movie clips).

A total of 22,752 photographers from 153 countries and regions submitted 99,339 works in the 2012–2013 contest, marking a new record for the largest number of entries in the history of the contest.

From roughly 100,000 entries, a global panel of judges selected one grand prize winner, a total of 48 first-, second- and third-place winners from each of the first three categories and three winners for the motion snapshot category. In addition, the best work captured using a Nikkor lens was selected for the Nikkor Award, and a single work was selected for the Participants Award for Most Popular Entry.

Winners were selected based on their ability to tell a universal story, diversity, the strength of their message, creativity and the techniques that best express these concepts.

The Nikon Photo Contest (NPC), previously known as Nikon Photo Contest International (NPCI) and presented by Nikon since 1969, is one of the world’s most prestigious international photo contests. It is designed to contribute to the expansion of photographic culture by providing an opportunity for photographers from around the world to communicate and exchange their photographic vision, irrespective of professional or amateur status. To date, more than 370,000 photographers have submitted over 1,460,000 photographic works in the contest. nikonusa.com